A joint report on national cancer statistics revealed today that rates of death in the United States from all cancers for men and women continued to decline between 2003 and 2007, the most recent reporting period available, according to the latest Annual Report to the Nation on the Status of Cancer. 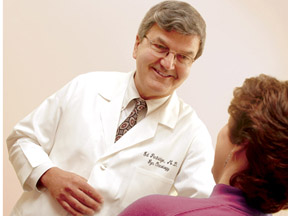 The report also finds that the combined overall rate of new cancer diagnoses for men and women decreased an average of slightly less than 1 percent per year for the same period. The drop in cancer death rates continues a trend that began in the early 1990s.

“While this news is positive, there is still a great deal of work left to be done,” said Edward Partridge, M.D., director of the University of Alabama at Birmingham Comprehensive Cancer Center. Alabama has one of the highest rates of cancer mortality in the nation. In 2010, Alabama was estimated to have had 23,640 new cases of cancer and 10,150 deaths from the disease, excluding basal- and squamous-cell skin cancers.

The report shows that cancer-death rates were highest among black men and black women, although this group also showed the largest decline for the period between 1998 and 2007 compared with other racial groups.

“It is especially gratifying to see the continued decline in cancer-death rates among black men and women; reducing cancer disparities has been a major focus of the UAB Comprehensive Cancer Center for more than two decades,” said Partridge, who also is president of the American Cancer Society national board of directors.

UAB’s cancer center is recognized as a national leader in reducing health disparities, most notably for its work across the Alabama Black Belt and Mississippi Delta. Led by the center’s Deep South Network for Cancer Control, the program is responsible for reducing the disparity in mammography screening rates among the Medicare/Medicaid population in these areas from 17 percent to 0.25 percent. The DSN also has trained more than 1,700 citizens in these regions as community health advisors to increase awareness of prevention and early detection among their families, friends and neighbors.

In the Special Feature section of the report, the authors explore the diversity of brain tumors and other nervous system cancers beyond those that are identified as malignant, including those that are borderline and benign. The researchers analyzed data between 2004 and 2007 and reported that non-malignant tumors were about twice as common as malignant tumors among adults.

Recent research by Harald Sontheimer, Ph.D., director of the UAB Center for Glial Biology in Medicine and a senior scientist in the UAB Comprehensive Cancer Center, revealed that gliomas, the most deadly type of brain tumor, use the peptide bradykinin to find blood vessels and spread throughout the brain. By blocking a receptor in the glioma cells that attracts bradykinin, the cells are unable to find blood vessels.

In a paper published March 30, 2011, in the Journal of Neuroscience, Sontheimer and post-doctoral fellow Vedrana Montana, Ph.D., report that they introduced a B2R-inhibitor known as HOE 140, a laboratory version of Icatibant, a drug approved for use in Europe for treating hereditary angioedema. HOE 140 interfered with the glioma receptor’s opportunity to bind to bradykinin with impressive results.

The national report also finds, for the first time, that lung-cancer-death rates decreased in women, more than a decade after rates began dropping in men.

“This is directly related to reduction in tobacco use, however, Alabama has one of the highest rates of the disease,” Partridge said.