by Savannah Koplon
April is Oral Cancer Awareness Month, and understanding the signs and symptoms helped save one young mother’s life. 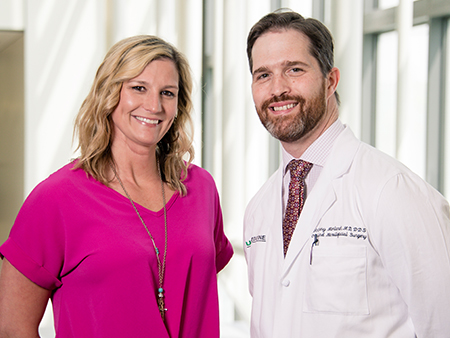 Wooten and Morlandt have developed a great relationship that accompanies her continuum of care.In January of 2015, four months after Stacy Wooten delivered her twins, Alyssa and Garrett, she noticed a spot on the side of her tongue that appeared to be a common ulcer. After seeing an ear/nose/throat physician who insisted it would heal on its own, Wooten sought out a second opinion.

Listening to her gut, she visited her general dentist for a routine teeth cleaning — two infants in tow, no less — after steroids and antibiotics had not helped heal the ulcer. Within minutes, Wooten was immediately transferred to an oral surgeon in her community for an emergency biopsy.

“I was pretty certain that was not a good sign,” she said.

Ultimately, it was news that no one wants to hear — it was determined that Wooten, only 31 at the time, had tongue cancer.

Facing a fight was not something foreign to Wooten. A Trussville, Alabama, native, she was a survivor of a rare form of ovarian cancer after being diagnosed at age 16 and undergoing treatment at UAB. She endured a seven-year journey filled with inseminations and IVF to become a mother, and never expected that another curveball could be thrown at her.

“We had been on such a journey to have our babies, and I just kept thinking, ‘Why is God trying to take them away from me?’” Wooten recalled. “I knew that, no matter what the doctors said, I had to go into survival mode and live. In the moment, it seemed near impossible and challenging; but I knew that it was what I had to do.”

After she received her tongue cancer diagnosis, she was sent to the University of Alabama at Birmingham School of Dentistry’s Department of Oral and Maxillofacial Surgery. There,  Wooten met Anthony Morlandt, M.D., DDS, FACS, associate professor and chief in the section of Oral Oncology in UAB OMFS and associate scientist in UAB’s O’Neal Comprehensive Cancer Center.

“Stacy’s case was unique because she had no inherent risk factors associated with oral cancers,” Morlandt explained. “It begs the question of why does a young woman develop such a devastating disease? The message here should be that patients deserve an early referral, that they need to know their body and that an oral biopsy can save their life.”

According to the American Cancer Society, 53,000 Americans will get oral cavity and oropharynx cancers in 2019; in Alabama, an estimated 880 new cases are to be expected. Alabama is fifth in oral cancer incidence nationwide, and UAB’s Oral Oncology Clinic is the leader in treating these specific cancers. 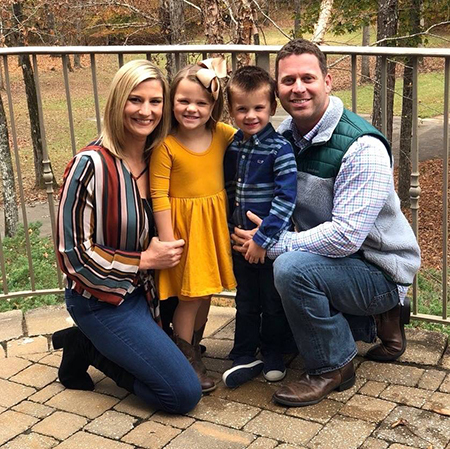 After her initial biopsy, Morlandt and his team performed surgery through Wooten’s neck to remove the cancer and potentially affected lymph nodes. They ultimately removed almost a third of her tongue in the process.

While luckily none of the lymph nodes had traces of cancer — which would have decreased her five-year survival rate by up to 50 percent — Wooten’s long journey to recovery posed its own set of unique challenges.

“I remember sleep training my newborn daughter with drains coming out of my neck postsurgery,” Wooten said. “I was determined to not miss a moment of motherhood that I had worked so hard to reach, no matter what condition I was in. To this day, I don’t regret a second of balancing it all.”

Morlandt still looks back on Wooten’s experience as a picture of optimal health care delivery.

“Oral cancer remains a disfiguring, devastating illness because it does impact chewing, swallowing and speaking, and often does leave outward scars. However, Stacy’s attitude and will to beat the odds are what make her special,” Morlandt said.

Morlandt explains that patients need to be aware that oral cancer is not just the disease of long-term smokers and drinkers; it is often masqueraded by common dental diseases like bleeding gums and a sore throat, so being mindful of symptoms that seem “off” is key in detection and treatment. As did Wooten’s first ENT, many people, including experts, misdiagnose an ulcer or abrasion as normal.

UAB’s OMFS Oral Oncology team works collaboratively with physicians in the department of Otolaryngology, Radiation Oncology, Medical Oncology and Dentistry to provide the most comprehensive care for patients. While Wooten’s journey is unique, many Alabamians will be impacted by oral cancer.

“Early detection is what saved Stacy’s life, no question. Her cancer was determined to be stage two, which could have drastically changed had she delayed seeing her general dentist for a few weeks or even months,” Morlandt cautioned others. “A dentist’s role can’t be understated; 75 percent of mouth cancers are discovered first by a dentist or hygienist on routine examination.”

Now, four years later, Wooten has a clean bill of health. She is actively participating in CrossFit competitions, and has not let her past cancers and challenges impact the way she lives her life.

“I live with a very ‘you only live once’ attitude, and I don’t ever want to regret not doing something because I am fearful. I’ve already gone through so many hardships, but have come out stronger on the other side,” Wooten said. “I encourage all people to trust their gut, seek another opinion if you aren’t satisfied with the answers you are getting, and have routine screenings. Because I heeded that advice, UAB has been instrumental in saving my life twice.”