by Adam Pope
MEN2A is a rare, hereditary condition occurring in roughly one in 35,000 people in the United States.

At first glance, Kevin, Kiala and Keaira Perkins may seem like typical 17-, 14- and 11-year-old children, respectively. But, after getting to know them, you might be shocked to find out that all three have suffered from thyroid cancer

The siblings, from Madison, Alabama, all suffer from a rare genetic condition called multiple endocrine neoplasia (MEN2A), a rare, hereditary condition occurring in roughly one in 35,000 people in the United States. It is caused by a mutation in the RET gene, which provides instruction for producing a protein that is involved in cell signaling and is needed for the normal development of several kinds of nerve cells.

“In December 2018, Kevin was tested for MEN2A by his pediatrician, and later received a call from UAB and Dr. Herb Chen,” said LaToya Wade, the mother of Kevin, Kiala and Keaira. “Dr. Chen said, ‘we need you here as soon as possible,’ and soon after we met with Dr. Chen, we scheduled surgery for Kevin.”

Soon after Kevin’s surgery to remove his thyroid, Kiala and Keaira underwent the same testing. The result: Both tested positive for MEN2A.

People with MEN2A have one functioning RET gene and one that triggers cells to divide abnormally, causing tumors in the endocrine system and other tissues. MEN2A, identified in the children’s father and aunt by the aforementioned blood test, leads to medullary cancer of the thyroid, pheochromocytoma — tumors in the adrenal gland — and hyperparathyroidism, which causes excessive calcium in the blood and can lead to kidney damage. If one parent has MEN2A, their children have a 50 percent chance of inheriting the same mutation.

“Thyroid cancers, including medullary thyroid cancer, start out so small that you don’t notice them,” Chen said. “With genetic testing in patients with MEN2A, if the child tests positive, I can tell a parent there is a 100 percent chance their child will develop thyroid cancer.  Importantly, we can do surgery ahead of time to remove the thyroid before the cancer develops.”

Chen, chair of the UAB Department of Surgery, says cases like the Perkins’ are an example of how genetic testing can diagnose someone’s risk and eventual prevention of cancer by doing prophylactic surgery (an operation before the cancer develops in the organ).

To treat the Perkins family, Chen removed the thyroids of all three children in addition to Kiala’s parathyroid. They will have to take medications for the rest of their lives to make up the hormones their body loses after removing the thyroid glands. 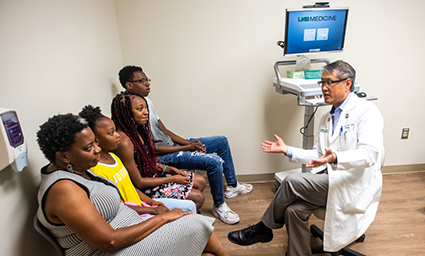 Chen says this case is a perfect example of how genetic testing can diagnose someone’s risk and eventual prevention of cancer by doing prophylactic surgery.It is a small sacrifice to prevent a larger problem.

“We were fortunate to treat the Perkins family while their cancers were very, very small,” Chen said.

Wade says that finding out a loved one has cancer is always scary, let alone three of her children. However, she knew her family would be in the best of care with Dr. Chen and Nurse Practitioner Kelly Lovell.

“For me, this was a trying process,” Wade said. “When your kids have surgery, you never know what’s going to happen. I just didn’t know what was going to happen. I didn’t want to tell them I was nervous, so I had my moments alone, and I just kept praying. My mind was all over the place, but now they are doing well. They’re on top of their game.”

Chen agrees that the siblings have a bright future ahead.

Kevin, a senior in high school, plans to study engineering in college, while Kiala and Keaira want to become an actress and a doctor, respectively.

Wade says she hopes her family’s story will help others seek genetic testing, so that doctors can prevent more cases of thyroid cancer from developing.

Chen, who also serves as a senior scientist with the O’Neal Comprehensive Cancer Center at UAB, echoes her wishes.

“We’re taking a cancer that could cause harm and completely removing it before it starts,” he said. “That’s why it is so important that people hear about this condition.”

If you would like to learn more about this rare genetic condition, the UAB Endocrine/Neuroendocrine Neoplasia Program of the O’Neal Comprehensive Cancer Center

and the Department of Surgery in conjunction with AMENSupport Foundation will host a multiple endocrine neoplasia patient conference Saturday, Nov. 16, 2019.

For more information, visit the Department of Surgery’s website.