by Savannah Koplon
Three generations of a family are forever linked from their shared rheumatic disease experiences and care at UAB. 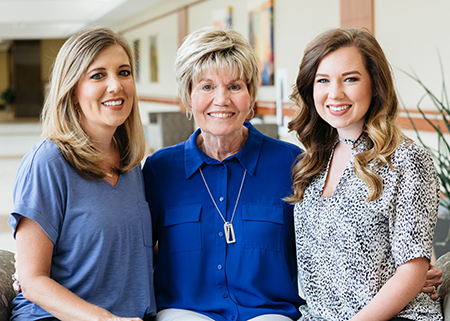 When Peggy Pack — now in her 70s  — was 22 years old and just out of college, her joints were noticeably sore. “It was the worst pain I have ever had,” she recalled. Pack visited her family doctor and was diagnosed with rheumatoid arthritis, a disease she has lived with for five decades.

Mandy Williams, Pack’s daughter, was 16 years old when she began experiencing tremendous fatigue and achiness throughout her body, particularly in her ankles. The pain lasted for nearly three decades, when Williams was finally diagnosed with lupus in her early 40s.

At age 15, Shelby Truitt, Williams’ daughter, was an active cheerleader and tumbler. Like her mother, she began experiencing tremendous fatigue and inflammation in her ankles, knees and wrists. When she would express her discomfort to her coaches and peers, they all said “you’ll be fine.” Even doctors dismissed her symptoms. She too was diagnosed just one year later at age 16 with lupus, just like her mother.

“It’s so important that people listen to their bodies,” Williams said.

What are rheumatic diseases?

Rheumatic diseases are autoimmune disorders that often affect the joints, bones and muscles, with different types of rheumatic diseases causing different complications for patients. The Centers for Disease Control and Prevention estimates that more than 54 million United States adults suffer from arthritic diseases like rheumatoid arthritis, lupus, osteoarthritis, gout and fibromyalgia, equating to about 25 percent of the population

For patients like Pack, rheumatoid arthritis, or RA, is a chronic disease that causes joint pain, stiffness, swelling and decreased movement of the joints. The small joints in the hands and feet are most commonly affected, according to the American College of Rheumatology.

Lupus, another chronic disease that both Williams and Truitt have, causes systemic inflammation that affects multiple organs such as the skin and joints, the kidneys, the tissue lining the lungs, the heart, and brain.

Because so many of the symptoms of rheumatic diseases are generalized — specifically lupus — they are hard diseases to identify and treat.

“The symptoms of lupus are initially often very non-specific, including fatigue, generalized aches, rashes and pains, and flu-like symptoms,” said Winn Chatham, M.D., professor of medicine in the University of Alabama at Birmingham Division of Clinical Immunology and Rheumatology. “People usually feel a lot worse than they appear, and family members, friends and co-workers need to understand this.”

Pack lived with RA for decades and had a great relationship with Chatham, her rheumatologist. So she knew to call him when Williams symptoms worsened in 2017.

“Dr. Chatham is my hero,” Pack said. “Autoimmune diseases are so hard to diagnose because there are so many gray areas. I knew he would be able to help Amanda figure out what was wrong.”

It turned out that Williams likely had had lupus since high school, but her symptoms were progressing slowly. Once she was under the care of Chatham and the UAB Rheumatology team, her lupus became more manageable. She showed the promise of the medication and therapies available for lupus patients once properly diagnosed and managed.

Once Williams was on the road of managing her treatment, she and Pack thought the rheumatic link was between just them. Then, Truitt — only a high schooler — experienced many of the same symptoms as her mother, causing her to miss cheer practices and suffer from her symptoms.

“I remember we were at church when I got the call that Shelby had lupus, and I was just devastated and crying,” Williams recalled. “It’s one thing for her mother and grandmother to deal with these diseases; but she was so young, and I just got emotional thinking about how she would have to deal with this in her life.”

For Truitt, the non-specific, generalized nature of her symptoms led many of her peers and school leaders to not believe her.

“I was active — a cheerleader, tumbler — so it didn’t make sense to people when I would explain how I felt,” Truitt said. “I looked fine on the outside, but you know in your mind and heart that something isn’t right.”

It was not until Truitt presented with the “butterfly rash,” a facial rash that is common with lupus, as well as rashes on her legs, that people took her symptoms seriously.

Through their shared journey and treatment — both under Chatham’s care, just like Pack — Truitt and Williams now have their lupus in a stable place with biannual visits to UAB for checkups. While grandmother, mother and daughter did not expect that their shared rheumatic experiences would link them, it has been beneficial to journey with one another.

“It’s validating when you know that they know what you are going through and can be there for you,” Truitt explained. “It’s important that people are in tune with their bodies and be their own advocates because, without my mother and grandmother, I don’t know that I would know what was wrong with me.”

Chatham echoed Truitt’s comments in explaining that it is challenging when patients feel as though they are not being believed.

“I want my patients — and those who may be experiencing rheumatic disease symptoms — to know that they are not alone,” Chatham said. “Often, the delay in diagnosis is because their initial symptoms are so non-specific.”

Pack, Williams and Truitt also want other patients to know that using their voice is important and that they can still continue to lead normal, active lives. Although Pack is now retired, she was the physical education teacher at Leeds Elementary School for years. She even started the Leeds Jump Rope Team, a testament to her strength and active lifestyle. Her daughter and granddaughter inherited her athleticism, and they continue to literally and figuratively move forward.

Truitt plans to attend Auburn University in fall 2019 and even has hopes of becoming a nurse, specializing in rheumatology.

“It’s so important that people listen to their bodies. If you know something is wrong, speak up; don’t second guess your gut feelings about your health,” Williams cautioned.