by Adam Pope
What connected two people before pales in comparison to what connects them now. 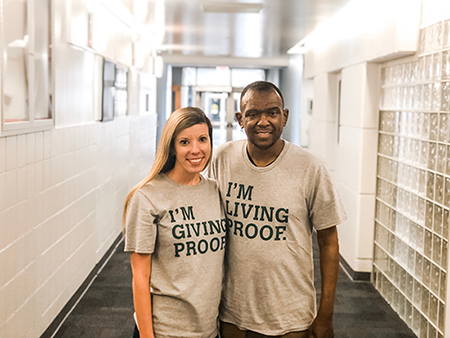 Pilot, a community pastor, math instructor and academic coordinator at Gulf Coast State College, found his calling as a mentor and a math teacher at Jinks Middle School in Panama City, Florida, after leaving the private sector in 2001. With a background in sports and a heart for mentoring young men, Pilot was offered a chance to be an assistant coach at Jinks by then-head football coach Don Vandergrift — Meyer's father-in-law — soon after being hired.

In May 2017, Meyer was hired as an educational resource advisor within the same department as Pilot. After quickly connecting the dots, Pilot told her that her father-in-law was the reason he was in education.

“He was the best mentor I could’ve asked for,” Pilot said. “He gave me a chance when I had no experience whatsoever.”

As they worked together, Vandergrift learned that Pilot was extremely ill. He had struggled with diabetes for more than 20 years, and Pilot had been diagnosed nearly five years before with kidney failure. He was on dialysis, and he had been on the waiting list for a kidney for more than three years.

“I didn’t have an education about kidney disease,” he said. “Psychologically, it was tough. Dialysis scared me because of my friends’ experiences. I didn’t really know what it meant. I just saw the end results. One of my parishioners at church ended up dying while on dialysis. That shook me and made me realize I was very limited on my time, and I needed to make adjustments in my life.”

In the past, other people were tested and not a match for Pilot. As a father of four daughters, Pilot says he was in denial at times that he was reaching end-stage kidney failure.

“I didn’t want anyone to have to sacrifice for me,” he said. “I just wanted to wait on a cadaver kidney.” 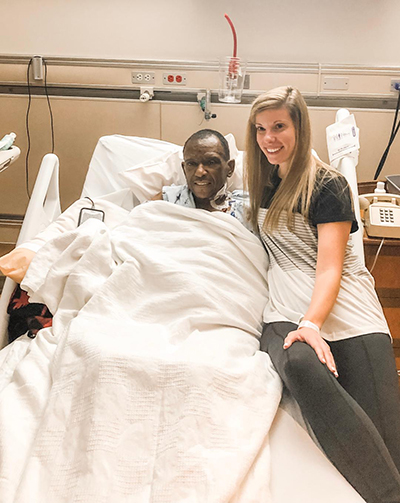 Meyer and Pilot before surgery.Meyer decided to do something about that. Her journey led her to the University of Alabama at Birmingham. Because of previous testing, Pilot was already on the list at UAB.

“I started asking questions and was eventually able to find the website that I would need to discreetly fill out a questionnaire that would determine whether or not I was a candidate for testing,” she said.

Within a few days, she received a phone call from UAB’s transplant program. Meyer was approved to be tested. In January 2018, she made the trip to Birmingham to undergo all the necessary tests and was later told she was a perfect match for Pilot.

When she delivered the good news to Pilot, he was in awe.

“I called my wife and we started crying,” he said. “Just the simple fact that she was willing to go to UAB was overwhelming.”

Meyer says she does not like a lot of attention. She is a fairly private person and did not tell many people she was going through the screening process to become a potential kidney donor for Pilot.

“However, the response that I received from the few people who did know made me a little sad,” she said. “While I obviously agree that the act of organ donation is a huge decision, and I will always greatly appreciate the sincere acknowledgment of that, I just feel like people helping people should be much more normalized within our society.”

Her husband, Josh Vandergrift, only reiterates that point. He explains that he was not the least bit surprised when she told him she was interested to know if she would be a match.

“Jessica wakes up every day with a relentless desire to make a positive difference in the world,” he said. “It’s just how she lives her life. She is intentionally thoughtful and kind with no need for recognition.”

“She said we need to do this,” Pilot said. “Her whole mindset is ‘Why are we making a big deal about this? Aren’t we supposed to do this for people?’ She understands the magnitude of what is happening. People are supposed to help each other.”

After starting the process in November of 2017, the surgery was finally scheduled for June 18, 2018. Both Pilot and Meyer were admitted to UAB the day before the surgery; but unfortunately, Pilot would end up being too ill for the surgeons to feel confident in proceeding. Meyer was discharged that night, while Pilot was required to stay for a few weeks. 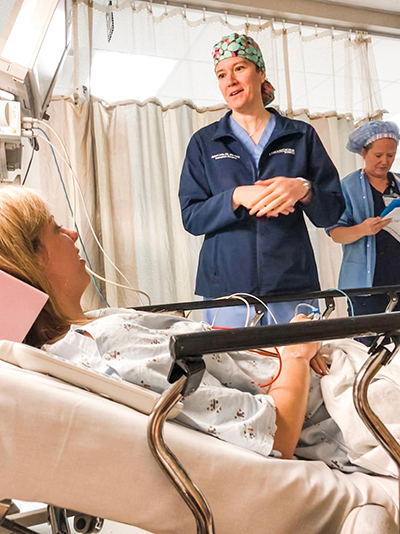 Meyer's surgery was performed by Jayme Locke, M.D.Pilot was eventually cleared to proceed with the surgery a few months later, in the fall of 2018. However, Mother Nature had other ideas. On Oct.10, 2018, Hurricane Michael — a devastating, Category 5 storm — wrecked the Florida panhandle when it made landfall. It was a direct hit on the place that Meyer and Pilot call home. The storm caused catastrophic damage from unprecedented wind and has been categorized as the most powerful hurricane ever to hit the region and the fourth most powerful ever to hit the United States.

Unfortunately, nothing was left untouched. Not only were the majority of homes severely damaged; but the schools, churches, restaurants, businesses and everything else within their community were left as huge piles of debris.

“Just imagine that for a moment — no power, water, cell service, radio signal, no means to travel away from where you are. And the worst part was a period of time when 911 did not even exist,” Meyer said. “If you’ve never been through a natural disaster of that magnitude, it’s hard to comprehend how much it truly impacts everyday life.”

Due to the destruction, Pilot’s lifesaving surgery had to be postponed again so that both families could focus on picking up the pieces and putting their lives back together.

But finally, just as the sun peeks from the clouds after a storm, a ray of hope appeared for Pilot on June 6, 2019.

“I had no idea how bad I felt all those years until now,” he said. “I feel like I’m 25 years old. I’ve gained 10 pounds and have so much more energy.”

It is Meyer’s passion for kindness that Pilot admires so much, and what connected them before — her father-in-law and work relationship — pale in comparison to what connects them now.

“She’s a friend of mine,” Pilot said. “I look at her like a real sister. I am so blessed and honored to know her.”