by Adam Pope
Trussville resident and World War II veteran Chuck Tompkins has no intention of slowing down, even after undergoing a TAVR procedure. 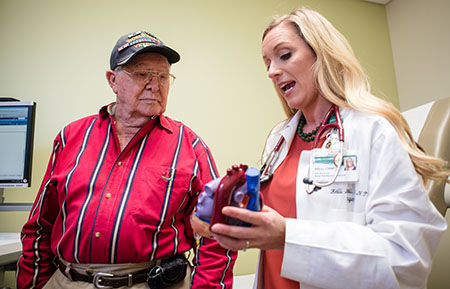 Clarence Tompkins and Kelli McConnell, DNP.Two Purple Hearts, a Silver Star and two Bronze Stars — that’s quite an accomplishment for any person who served in the military. But, if you meet Chuck Tompkins, you would realize how fitting those accolades are for the Trussville, Ala., native, and how a health issue would never faze him.

In 1941, Tompkins joined the United States Army and was sent to Fort McClellan in Anniston for basic training. He later was deployed with the 4th Infantry Division and went into France in the first wave of soldiers that stormed Utah Beach on D-Day. Even after experiencing small wounds, he continued with the military campaign.

In the Battle of the Bulge, the last major German offensive campaign on the Western Front during World War II, Tompkins was hit across his left shoulder and back with four bullets. Only two were removed due to their close proximity to his spine and nerves.

Tompkins was discharged in 1945 but refuses to think of himself as a hero.

“I’m just an individual,” he said.

After the war, Tompkins oversaw a lumber yard and bought and sold houses, working ever since, with no major health complications in his 97 years of life.

However, a routine checkup at the Veterans Administration Hospital in Birmingham showed that Tompkins had developed severe aortic stenosis — narrowing of the valve in the aorta — and was referred to doctors at the University of Alabama at Birmingham.

“I could tell I was slowing down a little bit,” he said.

After consulting with UAB doctors, it was recommended that Tompkins undergo transcatheter aortic valve replacement, or TAVR. The technology available at UAB for surgeons to perform a TAVR procedure is among the most advanced in the Southeast. In a hybrid operating room with both surgical and X-ray capabilities or in a specialized cath lab room, a multidisciplinary team places a guidewire through the malfunctioning valve, in most patients through a blood vessel in the groin. The new valve is compressed on a flexible catheter. With imaging guidance, it is positioned inside the malfunctioning valve, then expanded to replace the malfunctioning valve.

What makes TAVR unique is that it provides much quicker recovery compared to open-heart surgery, as most patients are in the hospital only one day.  Patients recover very quickly after the procedure and go to a regular room afterward, avoiding an ICU stay.

30 days post-surgery, Tompkins is feeling as good as ever and intends on getting back to work and play. Tompkins credits himself with impressive ballroom dancing skills — something he is excited about enjoying for a long time to come.