by Adam Pope
One woman’s mysterious illness left her searching for answers, and all it took was having someone listen.
.

Imagine being a college student — involved with multiple extracurricular activities, rigorous studying and more — and having everything turned upside down in a matter of months.

Anderson, a native of Buckatunna, Mississippi, is a senior at William Carey University. In winter 2017, she began to experience severe headaches and memory issues and saw flashes of light. 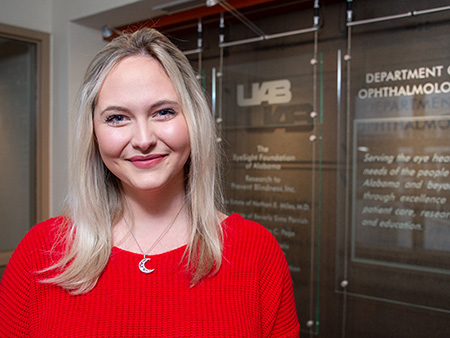 Kassidy Anderson“I thought it was probably a torn retina,” she said.

Her symptoms became significantly worse. Anderson says she would space out nearly 60 times a day, claiming she felt as though she were floating. However, she kept things to herself.

“I didn’t want anyone to freak out,” Anderson said. “I just dealt with it for a while. I didn’t even tell my mom. The thing about this was that I could pull myself together for about 20 minutes a day. Just 20 minutes. I didn’t want people to think something was wrong with me.”

By March of 2019, she could not keep her secret any longer and finally told her mother. By May, she had digressed significantly. She started experiencing involuntary eye and arm movements in addition to her other symptoms. All the while, her local doctors were unable to pinpoint what exactly the cause was.

“I felt like I was going to die if I didn’t get any help,” she said. “I couldn’t breathe, and my doctors thought I might have severe anxiety. I felt like a stranger in my own body.”

Anderson says one of the lowest points of her battle was one semester in her microbiology class when she could not even remember her own name. That is when she was referred to Michael Vaphiades, M.D., professor and chief of Neuro-ophthalmology and Electrophysiology Services with the University of Alabama at Birmingham’s Department of Ophthalmology and Visual Sciences.

It was there where something happened that she did not expect — Vaphiades listened.

What Vaphiades heard when he met Kassidy eventually led him to diagnose her as having anti-NMDA receptor encephalitis, a rare autoimmune disease that attacks the brain. The body creates antibodies against the NMDA receptors in the brain. These antibodies disrupt normal brain signaling and cause brain swelling, or encephalitis. It can affect both men and women; however, is more common among women.

The condition was depicted in the 2016 Netflix film “Brain on Fire,” a film that Vaphiades and a colleague had recently been discussing. After he told her about the movie, the symptoms experienced by the main character in the movie sounded eerily similar to what Anderson had. 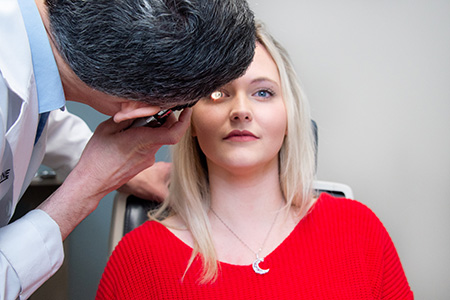 “The way she described certain things made me think she had something like that, even though the initial testing was negative,” Vaphiades said. “She said she was feeling out of touch and having these weird episodes, but the way she described them didn’t sound like seizures to me. She had headaches that couldn’t be accounted for by anything on the imaging or the spinal taps.”

Vaphiades discovered that a teratoma tumor could be the cause of everything. Once the lab tests came back positive for anti-NMDA receptor encephalitis, Vaphiades ordered imaging studies to determine whether there was an ovarian teratoma or other tumor that could be causing this problem. Those imaging studies came back negative.

“I knew it was a real longshot, but it was one of those instinct things,” he said. “I can’t fully explain why I felt so certain it was that, because this was way out of the realm of anything I had ever seen.”

Anderson was admitted to UAB Hospital and was prescribed a treatment plan of intravenous immune globulin (IVIG) while Vaphiades searched for the real cause of all her stress and pain. While at UAB, Anderson was treated by Shruti Agnihotri, M.D., assistant professor in the Department of Neurology. Numerous scans were done while Anderson was an inpatient at UAB, but none of them revealed a tumor.

Both Vaphiades and Agnihotri recommended Anderson follow up with a local gynecologist when she left the hospital in early July 2018.

At her first visit to the gynecologist, Anderson was told by her doctor that she had seen cases of this disease before and that she felt that the teratoma would appear. She advised Kassidy that she would need to have frequent ultrasounds to monitor.

In late December 2018, the gynecologist came into the exam room excited because the teratoma was finally visualized on the ultrasound.

Vaphiades was right, but it took several months for the teratoma to be large enough to see on the ultrasound. Anderson then had the ovary removed, with the tumor the size of an average human fist.

“There are many encephalidities that young women can get,” Vaphiades said. 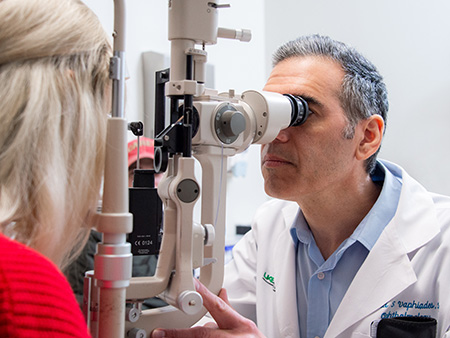 Anderson continues to see Vaphiades at his clinic every three to six months for continued care.Once the tumor was removed at her local hospital in Mississippi, Anderson began to improve drastically.

“Dr. V,” as Anderson calls him, never stopped checking in on her. That meant the world to her. Anderson continues to see him at his clinic every three to six months for continued care.

“I always knew, if I needed something, I could call Dr. V.,” she said. “He was making sure I got the help I needed. He made me feel like I was cared for.”

Vaphiades was determined to discover why Anderson was going through so much pain and confusion.

“You can’t let a negative test lead you around by the nose,” he said. “You have to talk to your patients and really listen to your patients, and if what they’re saying makes you really believe they have something, you just have to be persistent and stick with it.”

Anderson is grateful, so much that she has decided she wants to pursue neuro-ophthalmology as a career. A pre-med, biology-chemistry major at William Carey University, she hopes to pass her MCAT this spring and go to medical school.

“Throughout this whole process, I’ve learned so much,” she said. “I’ve been in the patient chair, and now I want to be able to help others who may be going through something like this.”