Coronavirus testing to expand with mobile locations in Jefferson County

by Tyler Greer
Community partners hope to test 20 patients a day initially and ramp up to between 50-100. 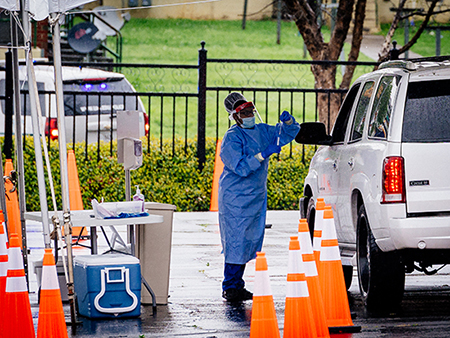 Community partners hope to test 20 patients a day initially and ramp up to between 50-100. Photography: Andrea Mabry In an effort to increase COVID-19 testing into the Birmingham area’s underserved communities, UAB Medicine, the UAB Minority Health & Health Disparities Research Center and Live HealthSmart Alabama, in coordination with the Jefferson County Unified Incident Command, is implementing mobile testing in Jefferson County. Testing will begin in western Birmingham on Thursday and in Center Point on Friday. The Jefferson County Department of Health is covering cost of the testing for Jefferson County residents who do not have health insurance.

“We must make every effort to protect our most vulnerable residents,” said Mona Fouad, M.D., Director, UAB Minority Health & Health Disparities Research Center and principal investigator for Live HealthSmart Alabama. “We have developed a testing model which addresses transportation and health care barriers while at the same time, fosters trust with members of vulnerable minority populations. Together, with our partners, we are committed to expanding walk-up and drive-through testing across Jefferson County.”

TELL US HOW YOU FEEL TODAY: We’re tracking the latest COVID-19 hotspots — with your help

“We are excited to be joining so many area organizations to provide an opportunity for access to testing in areas around Jefferson County,” said Mark Wilson, M.D., Health Officer of the JCDH and co-commander of the county’s Unified Incident Command. “As many now know, based on testing difficulties around the United States, the biggest barrier to expanding testing to date has been access to the supplies, both the swabs and reagents, and the lab platforms that run the test. While access to those key supplies needed to expand testing remain key obstacles, we are glad to be at a point where we can safely provide additional options to the residents of our county in their local communities.”

Rock City at Central Park in the western area of Birmingham will be the first mobile test site visit on Thursday, followed on Friday at Cathedral of the Cross in Center Point, said Jordan DeMoss, vice president of clinical operations at UAB Medicine. Both will test from 1 p.m. to 3 p.m. People with symptoms associated with COVID-19, including fever, a dry cough and shortness of breath, can call 205-975-CV19 (2819), for a screening. If the patient has a positive screen, an appointment time will be given.

“Not every person has the ability to come to our drive through Downtown Testing Site, so we want to be able to go to them and meet them in their communities,” said DeMoss. “We’re glad we’ve been able to build our testing capacity at UAB to support the goals of the Unified Incident Command to expand mobile testing across our communities in Jefferson County.”

Community partners in the current mobile testing endeavor include the Jefferson County Department of Health, Birmingham Strong, AIDS Alabama and the Hispanic Interest Coalition of Alabama. There has also been coordination early in the pandemic with Christ Health Center and Cahaba Medical Care, two Federally Qualified Health Centers (FQHCs), on previous community testing efforts to provide testing in underserved areas of Birmingham. Two other FQHCs, Alabama Regional Medical Services (ARMS) and Aletheia House, are in the process of adding further community testing capacity.

The Downtown Testing Site, which is located at University Boulevard and 22nd Street South, has tested more than 5,000 people since it began operating March 23 thanks in large part to the efforts of UAB’s Department of Pathology and UAB Hospital labs.

As for the mobile testing sites, Fouad, Wilson and DeMoss hope to test at least 20 patients per day to begin and eventually ramp up to between 50-100 people per day.

Mobile testing sites were determined by a data examination of the more than 10,000 tests UAB has administered to date, as well as other countywide testing data available to JCDH.