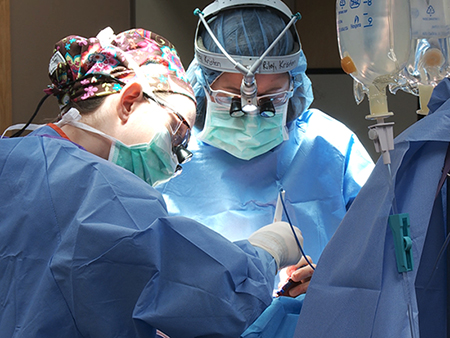 It is called LITT, or laser interstitial thermal therapy. It is a new procedure for some types of epilepsy, using a laser to remove brain tissue that is causing seizures. In Alabama, it is available only at the University of Alabama at Birmingham and Children’s of Alabama.

“In the short time we’ve been performing the LITT procedure, we’ve found it can reduce the number of open brain surgeries for epilepsy — surgeries where we have to remove part of the skull,” said Kristen Riley, M.D., professor in the Department of Neurosurgery. “LITT uses a laser beam directed through a pencil eraser-sized incision in the skull. For those cases where it is appropriate, LITT is less invasive, with fewer side effects and a shorter hospital stay.”

LITT is typically used for epilepsy that has a singular-seizure focus, meaning there is only one area of the brain that is causing seizures. Using a small opening in the skull, surgeons direct the laser to the appropriate spot, using MRI to determine placement. The heat from the laser ablates, or burns, the area of seizure focus.

Riley says LITT is also appropriate as a treatment for some tumors that are deep in the brain and less accessible to open cranial surgery, particularly tumors that are close to critical areas of the brain such as those controlling speech or movement. It may also be helpful following radiation treatment to hasten the removal of dead tissue that can cause brain swelling.

“It is a great option for patients whose epilepsy has a singular-seizure focus,” said Nicole Bentley, M.D., an assistant professor of neurosurgery. “It is well-tolerated with fewer complications than traditional surgery.”

“Coupled with a shorter hospital stay, reduction of complications and fewer side effects, it promises to be an effective way to treat epilepsy and tumors,” she said.

Bethany Freeman of Troy, Alabama, had LITT surgery performed by Riley three months ago. Now 41, her epilepsy came on when she was 29. She was experiencing as many as eight seizures a month.

“I would go blank, unable to focus on what I had been doing or who I had been talking to,” Freeman said. “People thought I was rude, but the biggest issue was that it wasn’t safe for me to drive.”

She spent only one night in the hospital following the procedure.

“The surgery was easy, the steps leading up to it were more complicated than the procedure itself as the doctors worked to understand where in the brain my seizures were coming from,” Freeman said. “I’ve had four seizures in the three months since the surgery, compared to about eight per month before. It was definitely worth it.” 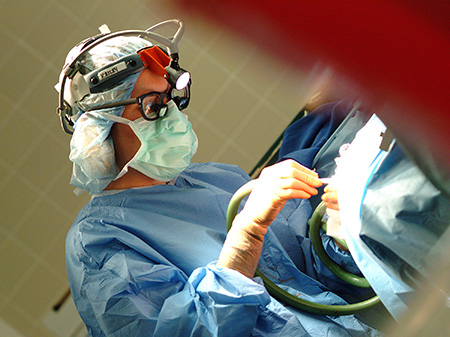 Faith Swinney of Spruce Pine, Alabama, tells a similar story. She is also 41, but her seizures began when she was just 10 years old.

“As I got older, my seizures got worse,” Swinney said. “About four years ago, I began to have one about once a week. I would often fall down, and I’m amazed that I was never seriously injured. As they got worse, I finally made the decision to have surgery. My neurologist in Huntsville sent me to UAB.”

In discussion of their cases during an epilepsy surgery conference within the UAB Epilepsy Center with neurologists and neurosurgeons, it was determined that LITT was a good option for Swinney, as it was for Freeman. She also had a one-night hospital stay, and has been seizure-free since the surgery.

“It was the right choice for me,” she said. “I have a small scar on my head now, and when I look at it, I say to myself that I have been very blessed.”

Both Riley and Bentley say that LITT requires specialized equipment, including MRI capability near or in the operating rooms. It also requires a dedicated epilepsy program, such as the UAB Epilepsy Center in the Department of Neurology, working closely with the Department of Neurosurgery. UAB pediatric neurosurgery, led by Jeffrey Blount, M.D., offers LITT at Children’s of Alabama.

For more information on LITT surgery at UAB, go to UAB Medicine or the Department of Neurosurgery website.