by Bob Shepard
Proton International at UAB reached significant milestones in its first year. More than 5,000 treatments have been performed, with most patients getting 30-35 treatments. Some 142 patients have completed therapy. 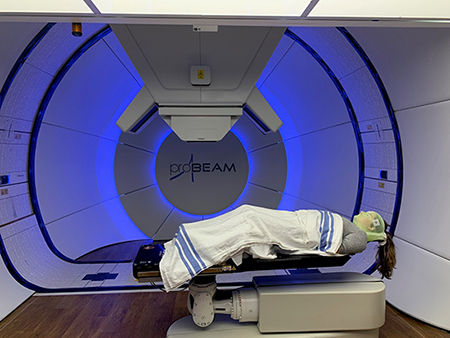 Sumer Beavers jokes that Proton International at the University of Alabama at Birmingham, the first proton therapy center in Alabama, was built just for her. It certainly was built for people like her, cancer patients for whom treatment with protons, rather than traditional radiation, is a more appropriate therapy. Since the facility treated its first patient one year ago on March 11, 2020, Beavers and 141 other patients have fully reaped the benefits of this advanced and innovative cancer therapy.

In January 2020, Beavers noted a growth behind her left ear. It grew to the size of a golf ball, and she underwent exploratory surgery March 3 that confirmed the cancer diagnosis of mucoepidermoid carcinoma. Doctors were hesitant to remove the tumor via surgery, especially since they knew the proton therapy facility was set to open is less than two weeks. Beavers was a good candidate for the new technology.

“Proton therapy uses focused beams of protons directed at the tumor site,” said J.W. Snider, M.D., medical director of the proton facility. “Our beam is configured to deliver the majority of its energy precisely at the tumor location using the pencil beam technology. Healthy tissue in front of the tumor receives substantially less dose, and the normal tissue beyond the tumor receives essentially no dose. This significantly reduces the damage to surrounding healthy tissues that is common in the use of conventional X-ray radiation and is the cause of most side effects.”

Construction of the facility, a partnership between Proton International and UAB, began in the winter of 2018, opening with a ribbon-cutting and reception Jan. 13, 2020, followed by the first treatments March 11. It is one of only 36 proton therapy centers in the United States. 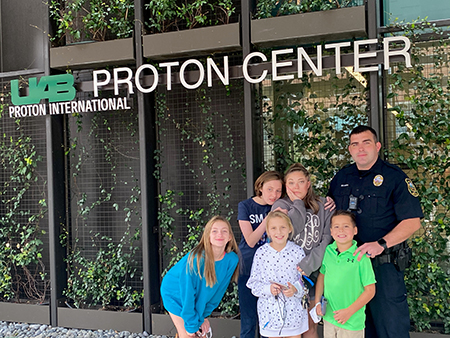 Beavers, celebrating with her family, is one of 142 patients who have completed proton therapy at UAB in the past year. “A year ago, it was such a terrific event to open our new proton therapy center, the first of its kind in Alabama,” said Jim Bonner, M.D., chair of the UAB Department of Radiation Oncology. “It has been a gratifying experience to offer this lifesaving treatment to many Alabamians and many patients throughout the world. Even in the midst of a global viral pandemic, the proton therapy center has flourished. We are looking forward to a productive year in 2021, and the chance to treat many patients who will benefit from this terrific new technology.”

Proton International at UAB reached significant milestones in its first year. More than 5,000 treatments have been performed, with most patients getting 30-35 treatments. Some 142 patients have completed therapy. The center can treat 40-45 patients per day.

“Proton therapy is an important tool in the cancer toolbox in the hands of the outstanding physicians at UAB’s Department of Radiation Oncology and O’Neal Comprehensive Cancer Center,” said Chris Chandler, CEO of Proton International. “It is extremely gratifying to know that the first 142 people have benefited from this exciting technology, and we are looking forward to helping countless others in their fight against cancer.”

Proton therapy is especially beneficial for pediatric patients. The youngest person treated at the facility was 2 years old, the oldest 91. Patients have come from around the world for treatment. Roughly 40 percent of patients are from outside Alabama, and 50-60 percent from outside the Birmingham area.

Beavers, married to a Pell City police officer with four children, says her life is getting back to normal. 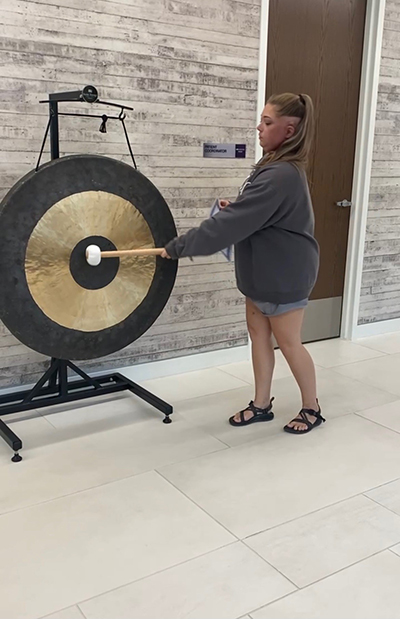 Banging the gong in the Proton Therapy Center lobby is a rite of passage for patients when they complete their therapy.“I beat the cancer, and that’s the important thing,” she said. “During my 30 treatments, there were good days and not so good days. But the staff was amazing. They kept telling me, “You are going to get through this and come out better.” They were there for me, encouraging, listening and supporting me during a very difficult time. They kept me going.”

The center boasts a large Chau Gong in the lobby, and every patient is encouraged to bang the gong in the presence of their family and center staff on the day they complete therapy. That was an important moment for Beavers. She had family and friends on hand, including two friends who had had the same type of cancer.

“I actually hit the gong twice, just to make sure,” she said, laughing.

Proton therapy is used to treat tumors of the brain and central nervous system, spine, head and neck, prostate, breast, lung, liver, gastrointestinal tract/colon, and soft tissues, among others. While it treats primarily single-site tumors, in some cases it can be used for treating cancer that has spread, or metastasized, to surrounding tissue because of its focused dose capabilities.

Proton International at UAB is on 20th Street South between Fourth and Fifth avenues. The facility consists of a three-story building to house clinical exam rooms, offices and the ProBeam proton therapy system, manufactured by Varian Medical Systems, a longtime partner with UAB in the delivery of radiation therapy. The medical staff, including radiation oncologists, medical physicists, dosimetrists, radiation therapy technologists and nurses, is exclusively from UAB.