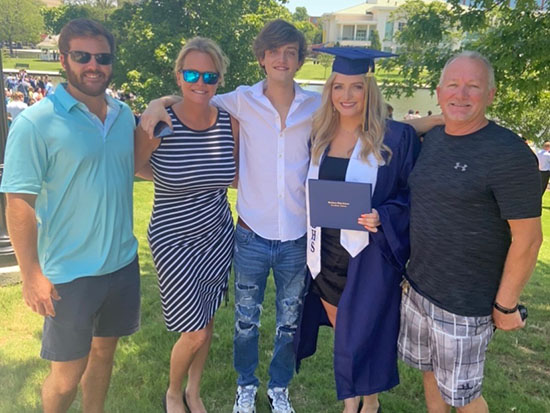 The Parsons family at Ally’s high school graduation. (From left: Cole Johnson, Julie O'Hara, David Parsons, Ally Parsons, Jim Parsons) Photo provided by familyAsk anyone who knew Jim Parsons, and they will tell you he was an adventurous person.

Parsons was a well-known personality as part of the Southeastern Cross Country Association — an off-road dirt bike racing organization across Alabama, Mississippi and Tennessee. After being involved in a dirt bike accident in late September 2021, he ultimately succumbed to his injuries, leaving him declared brain-dead.

But that is not the end of his story, or his legacy.

Parsons was an organ donor, and although his organs were not viable for donation, there was still an opportunity for him to leave a remarkable legacy by paving the way for thousands of people on waitlists for organ donation. He did so on Sept. 30, 2021, when Parsons’ family agreed to allow him to be part of a world’s first-of-its-kind xenotransplantation study at UAB Hospital and Legacy of Hope, Alabama’s organ procurement organization.

Parsons was the first person to have two genetically modified pig kidneys transplanted into his abdomen after his native kidneys were removed. The kidneys, which were procured from a pig at a clinical-grade, pathogen-free facility and transported to UAB, were modified with 10 key gene edits that made them suitable for direct clinical-grade therapeutic use in humans. 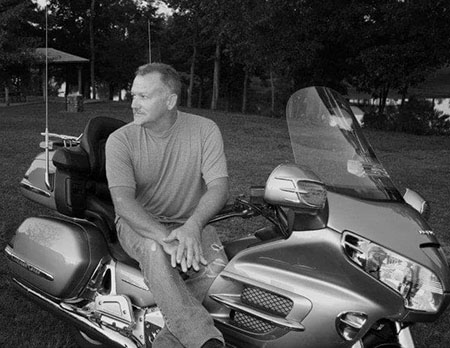 Jim enjoying his passion of riding motorcycles in 2003.
Photo provided by familyIn a promising sign from this research study, the transplanted genetically modified pig kidneys filtered blood, produced urine and, importantly, were not immediately rejected. The kidneys remained viable until the study was ended, 77 hours after transplant.

The study is also the first peer-reviewed/published research to establish brain death as a viable preclinical human model.

Jayme Locke, M.D., director of the Comprehensive Transplant Institute in UAB’s Department of Surgery and lead investigator for the study, proposed in the study published Jan. 20, 2022, in the American Journal of Transplantation, that this preclinical human model be forever known as The Parsons Model.

“I cried when she told me about that proposal, to name this after Jim,” said Julie O’Hara,  Parsons’ ex-wife, with whom he had remained close over the years. She made the decision to have Jim be a part of this groundbreaking study along with their children, Ally, David and Cole, and Parsons’ sisters and mother. “It’s a great honor. We’re extremely thankful that Dr. Locke decided to do that.”

Locke says the actions of Parsons and his family will benefit medicine beyond the field of xenotransplantation.

“What the Parsons family has done through this generosity not only helped us move the field of xenotransplantation forward, but Mr. Parsons helped introduce the world to a novel preclinical human model,” Locke said. “I think, moving forward, the Parsons Model can be leveraged to study the safety and feasibility of all sorts of things designed to improve the human condition, whether it be a medication or a new surgical procedure.”

Prior to this moment, a preclinical human model had never been published.

“The potential impact to mankind is huge,” O’Hara said. “The possibility of what Jim has done is just unthinkable to us. By contributing to this research, Jim could literally save hundreds of thousands of people. That would be the most miraculous thing. A dream come true.” 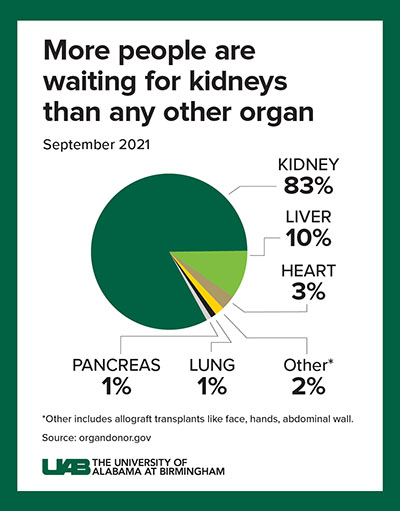 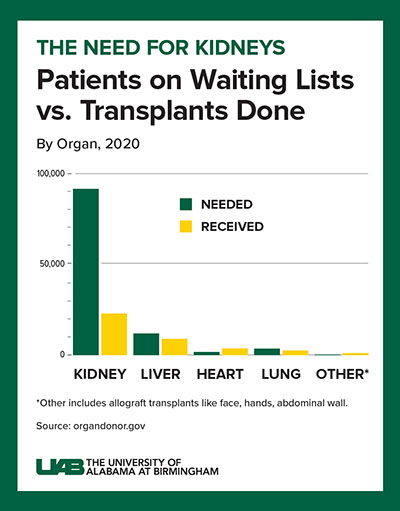 UAB is currently one of few xenotransplantation programs in the world. Its goal is to provide more options for those waiting on organ donation lists by using kidneys from genetically modified pigs to supplement to current living and deceased organ donation options.

If many people are compatible for a xenograft from a pig, that — paired with human-to-human allotransplantation — could potentially wipe out the kidney transplant waiting list.

However, researchers believe testing the safety and feasibility of a xenotransplant of this scope had to be undertaken in a brain-dead human before attempting to advance it into a clinical setting for therapeutic use. UAB surgeons and researchers had planned for some time to approach a family for a study of this type — one that they envisioned would mirror a Phase I clinical trial.

Alan Spriggs, program manager of Authorization Development with Legacy of Hope, Alabama’s organ procurement organization, approached the Parsons family with this rare opportunity to be a part of something that could change the course of many lives. Parsons’ accident occurred in Montgomery, Alabama; but O’Hara had already made her way to Huntsville to be with their children and family when Spriggs connected with her on the phone. Spriggs asked if she would be open to talking to Locke about a potential study.

“Alan said Dr. Locke would drive up to Huntsville to talk to me about it in person if that’s what I wanted,” O’Hara said. “We ended up putting her on speaker phone, and Ally and I were in the car together at the time. Dr. Locke explained the study and what it was about, and Ally and I both looked at each other, and we were both like, ‘yes, that’s definitely something we want to do.’”

O’Hara and Ally quickly connected with the rest of the family — sons Cole and David, and Parsons’ sisters and mother. They were all unanimous. This is what Parsons would have wanted.

“To say that they were remarkable is an understatement,” Locke said of Parsons’ family. “The notion of allowing us to enroll their loved one in something like this — really one of the first of its kind — was truly remarkable.”

It is not an easy request — to ask the family of someone who has been declared brain-dead to participate in something novel — but Spriggs said Parsons’ family believed he would have fully supported this decision.

“Ms. O’Hara was amazing through all of this,” Spriggs said. “She was such a strong person during an incredibly difficult time, especially for their kids. She said it would have meant a lot to Mr. Parsons to know that he was able to do something that was completely different and could potentially benefit so many.” 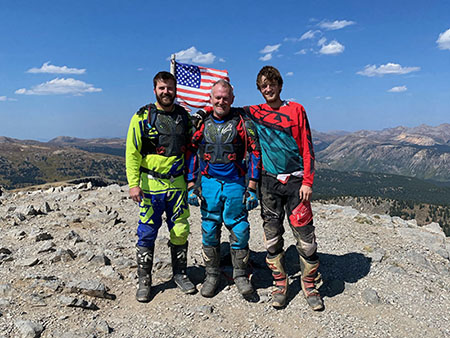 Jim and his two sons, Cole and David, rode dirt bikes to the top of American flag mountain in Colorado.
Photo provided by familyKeeping a legacy alive

Parsons began racing motorcycles in his youth and never shied away from adventure. Whether it was racing on the weekends, riding through the woods or making a cross-country trip to Colorado with his sons to ride motorcycles 13,000 feet up mountains a month before his death, he was never afraid to try something new.

“We had the time of our lives on that trip,” said David Parsons, who at age 22, also races motorcycles and now runs his dad’s business building custom closets for homeowners. “He had actually been to Colorado to ride dirt bikes many years ago, before I was born. He would always tell me stories about it, and I wanted to go. We finally did, and it was great. I didn’t realize how thankful I was for that trip until after he passed away. I’m just glad we got to take it. That was a trip he wanted to take us on his whole life, and I’m thankful for it.”

Parsons turned 57 on Sept. 22, 2021, a few days before his death. Ally says they all had a big family dinner to celebrate, and her dad was radiant, still beaming about the trip he shared with David and Cole.

“He was boasting about this trip,” she said. “He just had the greatest time, scaling and climbing mountains with his boys. I think it was the trip of his life, for sure.”

O’Hara says she and Parsons made a pact years ago to always be there for each other as a family.

“When we divorced, we made a covenant with each other — that our kids came first, and we would respect each other,” O’Hara said. “We were very, very true to that covenant, especially in the last two to three years. We talked often about the kids, and sometimes we just talked. We had a trust.”

Ally recalls a conversation that Parsons had with the family at that birthday dinner a few days before his death. There was a specific place at the top of American Flag Mountain where he told them he wanted his ashes to be spread when he died.

Talking about it now, it seems surreal to the family that they would have that conversation and then be planning to follow through on Parsons’ desires such a short time later. But, true to their dad’s wishes, that is exactly what they have done.

Next fall, around the time of Parsons birthday, the family plans to go back with several of his friends and travel up almost 13,000 feet, where it feels as though you can reach out and touch the sky, and lay Jim Parsons to rest.

“Our dad was definitely one of a kind who lived life to his fullest,” Ally said. “Losing him was really hard, but knowing so much light could come from such a sad thing is really important to me. Him looking down on us now, I know he’s very proud that his death could potentially bring so much hope to others.”

The story — and legacy — of Jim Parsons will continue to carry on.