by Adam Pope
A study claims vision screening in older drivers does not identify those who are likely to have collisions in the future. 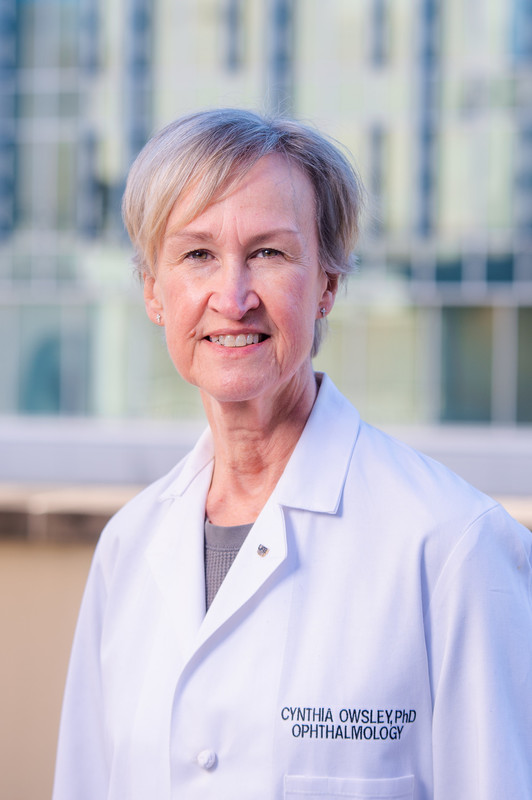 Cynthia Owsley, Ph.D.,
Photography: Lexi CoonNew research from the University of Alabama at Birmingham Marnix E. Heersink School of Medicine is shining a light on whether vision screenings for older drivers identify those who are likely to have motor vehicle collisions in the next few years.

Cynthia Owsley, Ph.D., professor in the Department of Ophthalmology and Visual Sciences, says decades of research have failed to identify a relationship between visual acuity impairment and MVC risk. In the United States, all drivers undergo vision screening as a requirement for licensure, and in some states, older drivers must be rescreened to continue driving.

The U.S. Preventive Services Task Force currently has no recommendations regarding screening for MVCs, although the evaluations performed by state driver licensing agencies could be considered as screening functions for the general population of driver applicants, according to the authors.

According to first author Gerald McGwin Jr., Ph.D., professor in the UAB School of Public Health Department of Epidemiology, the results of the current study — published in Ophthalmology — indicate that such screening, if tied to license renewal, would unduly penalize older drivers.

“Vision screening in older drivers does not identify those who are likely to have collisions in the future,” Owsley said. “While visual dysfunction in several areas moderately elevates collision risk, it is a significant but small impact, and is not at the level of being sensitive or specific for prevention of collisions.”

The study cohort consisted of 2,000 licensed drivers age 70 years or older who resided in Jefferson County, Alabama, or the bordering counties located in north central Alabama. Ten percent of the study participants had impaired visual acuity or contrast sensitivity, as defined by clinical guidelines.