Hope through adversity — how one patient continues to press forward with gratitude for life, family and friends

by Alicia Rohan
Jeana Russell shares her story of resilience, the importance of knowing your body and when to seek medical attention. 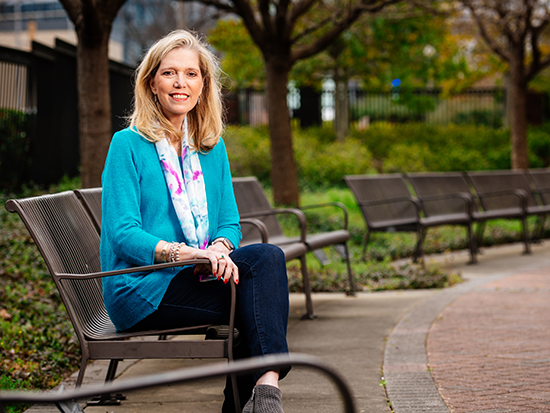 Jeana Russell shares her story of resilience, the importance of knowing your body and when to seek medical attention. Nearly 32 years ago, Jeana Nesmith Russell was beginning her dream career as a nurse in one of the University of Alabama at Birmingham’s hospital units while pursuing her graduate degree.

Little did she know that her life was about to change forever.

During the fall of 1990, Russell, then 23 years old, thought she was having a seasonal bout of strep throat. Except this time, it did not get better.

“After two rounds of antibiotics, I noticed two swollen lymph nodes and started to get concerned,” said Russell, who visited an ENT and was sent home with the diagnosis of cat scratch fever.

“Being a nurse, I knew my body and I knew something wasn’t right,” Russell said. “After a biopsy, I was diagnosed with stage 2 Hodgkin’s lymphoma. This cancer is very rare, making up 0.5 percent of new cancer patients, yet it’s the most common among adolescents and young adults. Everyone was floored.”

Since Russell was a nurse at UAB, that is where she decided to receive her radiation treatments.

“Radiation was much stronger — and primitive — back then,” Russell said. “A lot of the long-term side effects weren’t yet known, especially in terms of cardiac health. I received treatments all over my body every day, Monday through Friday. I was the youngest nurse on my unit, so everyone took great care of me.”

“I graduated from and worked at UAB, which has played a tremendous role in keeping me alive,” Russell said. “I honestly believe that is one reason I am still here. All my doctors from UAB have been extremely inspirational and my cheerleaders. I am so thankful for my family and the outstanding team of doctors I have at UAB. And I’m surrounded by the best medical care possible.”

Clark Stewart, Russell’s radiation therapist at the time, says Russell was the first person he treated that was the same age as he was.

“It was very scary for me to treat Jeana,” said Stewart. “But what’s the greatest is that we’ve created a special friendship that has lasted over three decades. She’s the most awesome survivor!”

Two years later, Russell married the love of her life, John Russell. Life was starting to look up again.

Unfortunately, Russell’s story was far from over. After hitting the five-year post-treatment mark, Jeana and John were given permission to try for a family with the caveat that it was unlikely.

“It was a miracle that I got pregnant because I only had a portion of my right ovary remaining after treatment for two large ovarian cysts, likely caused by the radiation. With everything I had gone through so far, I was the happiest pregnant woman ever.”

At age 32, Russell gave birth to her son, Preston, who was instantly the light of her life. By the time he was 3, Jeana had reached the 10-year treatment mark when she underwent a pet scan on the recommendation of her oncologist at that time, Sharon Spencer, M.D., professor and chief of Medical Services in UAB’s Department of Radiation Oncology.

On Sept. 12, 2001, the day after the nation experienced great terrorism tragedy, Russell was sitting in the waiting room anxiously awaiting the test results. To her surprise, it showed cancer — a recurrence of Hodgkin’s lymphoma. 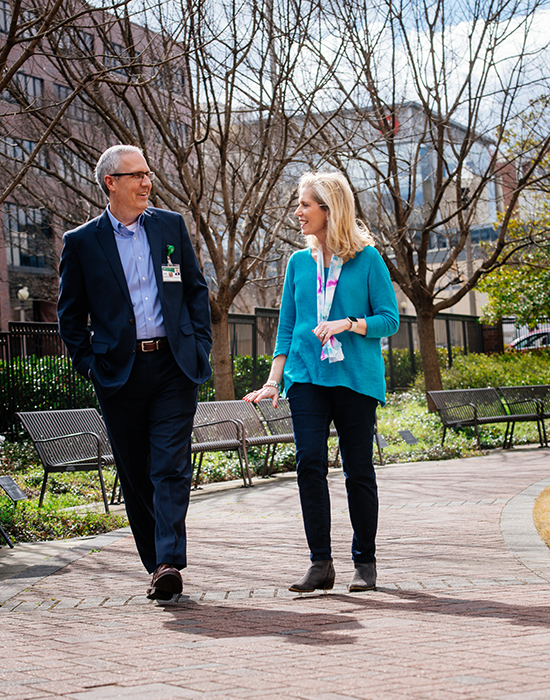 Jeana with her husband, John RussellRussell also learned that she could not receive additional radiation because she had already reached her lifetime limit. She followed up with six months of chemotherapy and a precautionary bone-marrow harvest. Once again, she went into remission, not knowing that a decade of treatment was creating a spiral of negative effects, including damage to her heart.

In November 2013, while John and Preston were in Auburn for a football game, Jeana was walking her dog when she passed out in her neighborhood, waking up with a face covered in blood. A trip to the emergency room led to a visit with her cardiologist, Sharon Dailey, M.D., clinical associate professor in UAB’s Department of Medicine, who discovered 100 percent blockage in one artery and 85 percent in the other two.

Russell underwent an emergency triple-bypass open heart surgery the next morning. Despite the rising health concerns, she remained in great spirits.

“A couple of years after the heart surgery, I was still having various cardiopulmonary issues,” Russell said. “The radiation was causing what is now referred to as ‘toxic late effects.’ Most people wouldn’t have made it this far in their journey, so we were all learning about my conditions as we went.”

In the summer of 2020, Russell needed a pacemaker.

“A year passed, and one day my pacemaker indicated that I was in AFIB 50 percent of the time,” Russell said. “I had a cardiac ablation procedure done on a Tuesday and suffered a mild heart attack that Sunday, but I didn’t know it. I stayed in the hospital for one week. Soon after, I was able to begin cardiac rehab at UAB, which I am still doing.”

The impact of her first brush with cancer in 1990 is felt in other ways. Diagnosed with breast cancer in 2019, another late side effect of radiation, she underwent a double mastectomy. Three years later, she remains in remission.

Russell is now under the care of Carrie Lenneman, M.D., associate professor in UAB’s Marnix E. Heersink School of Medicine Division of Cardiovascular Disease, who specializes in cardio-oncology and is highly familiar with the late effects that radiation has on the heart. 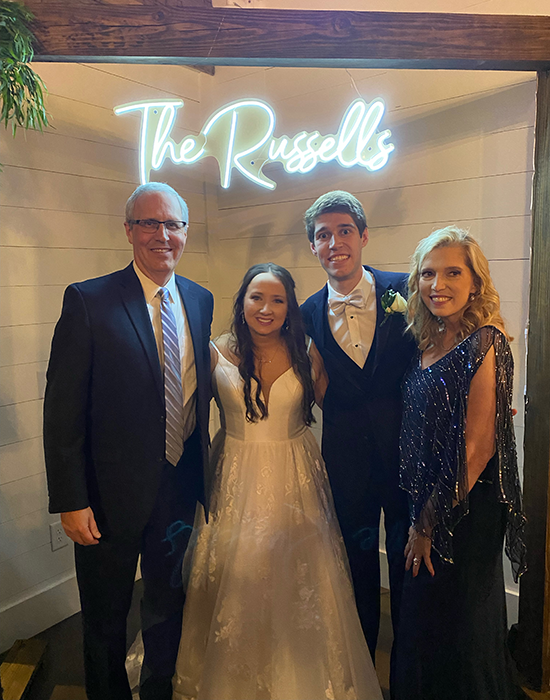 Jeana and her husband at their son Preston's wedding. show that Hodgkin’s lymphoma survivors who were treated with radiation have a three to five times greater risk of myocardial infarction that the general population and a four- to sixfold increase in congestive heart disease.

“It’s great to have found someone who really understands my condition and what I have been going through.”

Russell is still on her journey to healing and credits UAB for being a huge part of her positive journey.

“I graduated from and worked at UAB, which has played a tremendous role in keeping me alive,” Russell said. “I honestly believe that is one reason I am still here. All my doctors from UAB have been extremely inspirational and my cheerleaders. I am so thankful for my family and the outstanding team of doctors I have at UAB. And I’m surrounded by the best medical care possible.”

“My advice is to always be aware of your body and know that you have a voice in your care,” Russell said. “Be your own advocate and get a second opinion — being proactive about your health care is a must.”

By sharing, she hopes one day her story becomes someone else’s survival guide.