Out of sync? Asynchronous signaling may improve neural output

UAB research shows communication between neurons is not a static conversation, but an ongoing, dynamic story.

Since the Rolling Stones first crooned “Time Is On My Side” during a riotous appearance on the Ed Sullivan Show in the early 1960s, science has known timing plays a key role in information transfer between neurons. This information transfer depends on the meticulous release of electro-chemical messengers, called neurotransmitters, in response to nerve impulses. 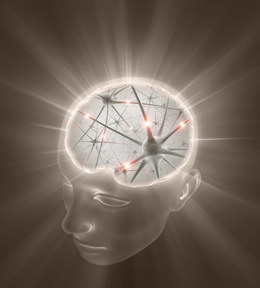 Now, however, the understanding of the limits of neural communication is changing, based on new research from the University of Alabama at Birmingham Evelyn McKnight Brain Institute.

Challenging a long-held belief that neurotransmitters are fired simultaneously from storage vessels, called microvesicles, UAB researchers show that the brain can alter the timing of the release of these neurotransmitters and refine its synaptic signaling. The results were published online in the June 8, 2011, edition of the journal Neuron.

“We have uncovered what may be a new method of refining temporal signaling,” says Jacques Wadiche, Ph.D., UAB assistant professor of neurobiology. “It was serendipity, really. We noted small alterations in response to minute changes in signal timing in one type of neuron that turned out to have big consequences.

“We discovered that communication between neurons is not a static conversation, but an ongoing, dynamic story,” Wadiche says. “We now know neurons vary the intensity, rate and timing of their reply in response to changes in the frequency of incoming messages just as changes in tone, pitch or word patterns can affect a listener’s response,” Wadiche said.

Rather than using experimental frequencies to provoke a nerve impulse, Wadiche and his colleagues, Stephanie Rudolph, Ph.D. and Linda Overstreet-Wadiche, Ph.D., assistant professor of neurobiology at UAB, stimulated synapses at physiological frequencies of one-to-two Hertz, rates similar to those in the brain.

When Wadiche and his team stimulated Purkinje cells, the principal neurons in the cerebellum, microvesicle release was desynchronized. Current ideology assumes there is release of zero vesicles, a single vesicle or a few vesicles, in response to stimuli.  Alternatively, several vesicles can fuse and release their contents in a process known as multivesicular release, or MVR.

“Prevailing opinion suggests action potentials initiate synchronous MVR, a dispersal of vesicles all at the same time, with little temporal dispersion,” said Wadiche. “Our findings show this is not always the case at the Purkinje cell synapse,” said Rudolph.

Wadiche and his team say this change of pace, or desynchronization, in vesicle dispersal allows neurons to modulate information transfer, consequently extending what we know about neuronal communication. Specifically, desynchronizaton of MVR from the pre-synaptic axon alters and regulates the elicited response in the post-synaptic cell.

Imagine standing at the ocean’s edge as waves hit the shore. Consider the impact of increases in wave height. What if the rate at which the waves got higher increased and the waves struck more rapidly? These frequency-dependent factors affect the response to the wave’s dissemination of its message — its impact.

Desynchronization changes the wave size, rate and interval of Purkinje cells’ response to neurotransmitter — changing the message and impact of the message in the cerebellum.

Wadiche’s group has not measured the behavioral consequences of MVR on message output; nonetheless, it is possible to predict potential effects on motor control. MVR in Purkinje cells probably fine-tunes your ability to stand on the beach — pick up seashells and get up when the waves knock you down.

By Suzanne Byan-Parker for UAB News