Stopping exercise leads to significant reductions in strength after just a few weeks, according to a new report from UAB researchers. 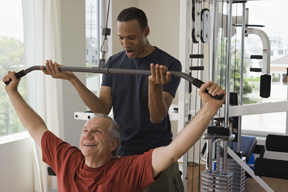 Older adults need more frequent exercise than younger people to maintain muscle size, according to a study done by researchers at the University of Alabama at Birmingham.

The report, “Exercise Dosing to Retain Resistance Training Adaptations in Young and Older Adults,” was published in the July 2011 issue of Medicine & Science in Sports & Exercise, the official journal of the American College of Sports Medicine. The two-phase exercise trial, led by Marcas Bamman, Ph.D., a professor of physiology and biophysics at UAB, sought to determine the appropriate exercise dose to maintain muscle mass, muscle size and strength in older adults, between the ages of 60 and 75, and in younger adults between 20 and 35.

“All adults should include progressive resistance exercise in their weekly regimen, but there will always be times, such as extended travel or a family illness, when exercise is difficult to sustain,” said Bamman, “Stopping exercise altogether – called detraining – leads to significant strength reductions after just a few weeks. Our team sought to determine how little exercise a person needs to maintain strength.”

Results indicate that improvements in strength can be retained for an extended period after training ceases. While once-a-week exercise is sufficient to maintain strength, there are age-specific differences in the required dose to maintain muscle size. Among the older participants, none of the three groups maintained muscle size. Older adults likely require more frequent training to maintain muscle mass gained from resistance exercise, Bamman says.

“Our data are the first to suggest that older adults require greater weekly maintenance dosing than younger individuals to maintain resistance-training-induced increases in muscle mass,” said Bamman. “We are not advocating that people only train one day a week indefinitely, but we do believe such a program can be effective during temporary periods when it is difficult to maintain a consistent, intensive exercise regimen several days per week.”