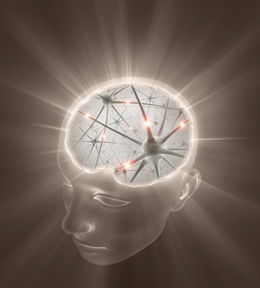 One percent of the population in the United States has schizophrenia.  Doesn’t sound like much, says University of Alabama at Birmingham psychiatrist Robert McCullumsmith, M.D., until you put it in perspective. In a high school class of 300 for example, three may have schizophrenia. It’s a disease that is not well understood, not well treated and can be devastating.

UAB has received two grants totaling $3.9 million from the National Institutes of Mental Health, one of the National Institutes of Health, in an effort to better understand schizophrenia and look for new targets for therapies. McCullumsmith is the lead investigator on one of the grants. James Meador-Woodruff, M.D., chair of the Department of Psychiatry and Behavioral Neurobiology, heads the other.

The target of both is glutamate, a major neurotransmitter in the brain. The tools are cutting-edge methodologies, including laser capture micro dissection – a device that can isolate specific cells for detailed analysis – and advanced proteomics techniques that study the function and structure of proteins. The goal is to better understand why there are profound deficits in glutamate signaling and processing in the brains of those with schizophrenia.

“We know that there is something wrong with the handling of glutamate in the brains of people with schizophrenia,” says McCullumsmith. “What we don’t know is just what is wrong. Is there too much glutamate? Too little? Is it in the wrong place at the wrong time? These studies will look for those answers, and hopefully come away with new targets in the brain for medications or other therapies.”

Schizophrenia is an especially troubling condition because it usually begins in young adults between the ages of 18 and 25.

“People who previously had demonstrated relatively normal development and are in the midst of going to college, starting a family or beginning a career suddenly have deterioration in function, including social and occupational skill sets,” says Meador-Woodruff. “They typically are unable to work and have a hard time maintaining interpersonal relationships.”

More financial and community resources go toward the care and treatment of schizophrenia than any other medical illness, says McCullumsmith, and it’s an equal opportunity condition, affecting all socioeconomic segments and populations.

There are medications available to treat what are called the “positive” symptoms of schizophrenia. Positive symptoms are manifestations that a patient has that they should not have, such as hearing voices and suffering from delusions and hallucinations. Those medications, some developed more than 50 years ago, have serious side effects. The older ones can cause movement disorders; the newer versions can spur obesity, heart disease and diabetes.

There are no medications that deal with what are called “negative” symptoms – manifestations a patient should have but does not. These include grasping the concept of non-verbal communication, motivation and even understanding the need for good grooming and hygiene.

Meador-Woodruff says there are also cognitive symptoms such as decline in memory, decision making and problem solving. Again, there are no medications to treat these symptoms.

In both trials, the researchers will compare brain tissue collected from patients with schizophrenia who donated their brains to brain banks, including the Alabama Brain Collection, a tissue repository managed by Rosalinda Roberts, Ph.D., a professor of psychiatry at UAB.

Comparisons made between schizophrenic brains and normal controls may reveal changes in glutamate signaling, uptake or dispersal. Meador-Woodruff’s main focus will be on glutamate receptors on cells, while McCullumsmith’s project will look at the mechanism by which excess glutamate is removed from the brain.

“Schizophrenia is a disease that likely has many causes,” says Meador-Woodruff. “There is strong evidence that glutamate plays an important role in the development of the disease. Hopefully, these studies will help define that role and lead us to a better understanding of how to treat schizophrenia.”