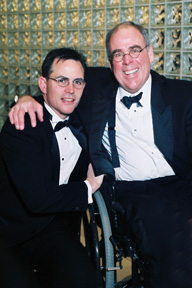 At a reception held in Brewton, Ala., Edward E. Partridge, M.D., director of the UAB Comprehensive Cancer Center and president of the American Cancer Society Inc., announced a philanthropic initiative to advance gastrointestinal (GI) cancer research and patient care. By raising $5.5 million, the Cancer Center hopes to expand the team of experts and accelerate scientific discovery leading to better treatments and earlier detection methods. The first phase will raise $1.5 million to establish an endowed chair in honor of the late James Hayes (pictured at right in photo), a Brewton native who was an integral part of the Cancer Center and passed away in 2008 after a courageous battle against colon cancer.

Hayes joined the Cancer Center Supporters Board in 1988 and was president from 1994 to 1996. His wife, Ann Hayes, joined in 2002 and continues to serve. Throughout his years, Hayes passionately encouraged others to become involved and contribute to advance scientific understanding of the disease.

“The James P. Hayes Jr. Endowed Chair in Gastrointestinal Oncology will be a lasting tribute to Jim and his tireless advocacy for the UAB Comprehensive Cancer Center’s efforts to discover a cure for this disease, which affected him personally and also has touched many of his fellow Alabamians,” said Partridge. GI cancers are particularly difficult and require a series of complex and coordinated treatments. Currently there are no methods doctors can use to detect GI cancers that affect the pancreas, liver, esophagus and stomach in their earliest stages when they are most treatable. The Hayes family has made a lead gift for the endowed chair.