by Jim Bakken
The therapy uses very low electromagnetic frequencies without medications or chemotherapy and showed significant results in a phase II study.

A potential new option is beginning to emerge for patients with the fastest growing form of cancer in the United States, according to researchers at the University of Alabama at Birmingham. 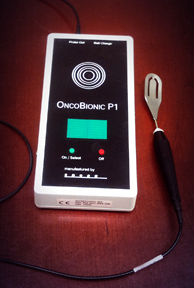 In a phase II study, 41 patients with hepatocellular carcinoma (HCC), a liver cancer that often does not respond well to chemotherapy, were treated with very low levels of an electromagnetic field emitting from a spoon-like device placed in the patients’ mouths.

After six months, the tumors in 14 patients had stabilized after each received three one-hour treatments per day each day; the therapy created no significant side effects. The most successful tumor shrinkage occurred in a female patient who has received regular therapy since August 2006; her tumor continues to shrink without serious side effects.

Boris Pasche, M.D., Ph.D., director of the UAB Division of Hematology and Oncology in the Department of Medicine, and collaborators reported their findings Aug. 9, 2011, in the online version of the British Journal of Cancer.

“The very appealing advantage of this novel therapy is its capability to shrink tumors without collateral damage. This method literally finds cancer cells in the body and blocks their growth without affecting the growth of normal cells,” says Pasche, senior author of the study.

To date, other treatment options have been limited. The U.S. Food and Drug Administration has only approved one drug, sorafenib, in 20 years. Pasche says this drug does prolong life an average of three months, but it doesn’t make the patient feel better.

“With our treatment, seven of the 11 patients who reported pain prior to the start of their treatment reported either a complete disappearance of pain or decreased amounts,” says Pasche. Preliminary evidence also indicates that the treatment not only affected the primary cancer, but also its metastases.

The small battery-driven “radio frequency electromagnetic field generator” has an attached spoon-shaped mouthpiece. The device is programmed and the patient pushes a button to start treatment. It is like a watch in that it emits low levels of amplitude-modulated radio frequency, resulting in the delivery of doses 100 to 1,000 times less than those generated from a cell phone.

“When you take the mouthpiece and put it in your mouth the body becomes an antenna – the whole body receives a tiny but fairly homogenous amount of radio-frequency,” Pasche says.

In a 2009 study, Pasche and research partners Alexandre Barbault in France and Frederico Costa at the University of Sao Paulo in Brazil identified tumor-specific frequencies and tested the feasibility of administering such frequencies to patients with advanced cancer. They then decided to determine whether these frequencies had an effect on the growth of tumors.

Pasche believes this a promising therapy that could become a standard of care in the near future. The therapy is ready for an FDA-registration study and randomized trials, which will be initiated at UAB upon funding being secured for the project. Pasche disclosed on the paper that he has “filed a patent related to the use of electromagnetic fields for the diagnosis and treatment of cancer.” He also disclosed that he is a founding member of TheraBionic LLC.

“Although liver transplant is the most effective treatment, that option will be available for only a fraction of patients. Better therapies are sorely needed for the larger number of HCC patients,” Pasche says.