A drug already on the market for Crohn’s disease might help slow the growth of gliomas, the brain cancer that killed Sen. Ted Kennedy in 2008.

New research from the University of Alabama at Birmingham pinpoints the relationship between primary brain tumors and the onset of epileptic seizures and reveals that a drug used to treat Crohn’s disease inhibits those seizures and may be able to slow a tumor’s growth. 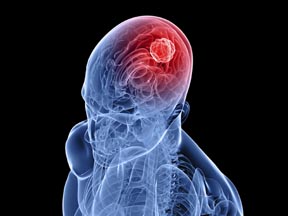 The onset of seizures is a common symptom in gliomas and often is the first sign of a brain tumor. Sen. Ted Kennedy had a seizure in May 2008, and three days later doctors confirmed that he had a malignant glioma. Kennedy died the following year.

In findings published on-line on Sept. 11, 2011, in Nature Medicine, the UAB team shows that malignant glioma cells release a tremendous amount of a neurotransmitter called glutamate into healthy neurons surrounding the tumor site. Neurons normally use glutamate to communicate with one another, but not in the staggering amounts released by the glioma cells.

“These tumor cells produce an enormous amount of glutamate, 100-fold beyond normal,” said Harald Sontheimer, Ph.D., professor of neurobiology at UAB and lead investigator. “This leads to a state of hyper-excitability that overwhelms healthy neurons and leads to their death.”

Sontheimer says the death of neurons in proximity to the glioma gives the malignant cell room to grow and expand into the space previously occupied by the neurons.

“The brain is a dense, closely packed space,” said Sontheimer, who directs the UAB Center for Glial Biology in Medicine. “For the glioma to grow, it has to make room for itself, which it does by clearing out surrounding neurons with this blast of glutamate.”

Excess glutamate can also cause abnormal electrical activity in the brain, which is the basis for epileptic seizures. Sontheimer’s team found that mice with human glial cells developed abnormal brain activity and behavioral signs consistent with seizures.

The good news, Sontheimer says, is that sulfasalazine, a drug used to treat Crohn’s disease, irritable bowel disease and some types of arthritis, seems to inhibit the glioma from releasing the large amount of glutamate. In mice, sulfasalazine stopped the release of glutamate and prohibited seizures.

Without the abnormal glutamate release, the nearby neurons are unaffected by the glioma, and its growth is compromised. Sontheimer says evidence suggests that tumor cells that cannot grow tend to die.

But sulfasalazine, as formulated to treat Crohn’s disease and other conditions, is not an efficient way to treat gliomas; because it is designed to break apart in the intestines, only about 20 percent of the drug gets into the blood stream where it can be carried to a glioma site in the brain. Sontheimer says, however, that the drug could be re-formulated to make it more efficient and effective.

“The drug could be re-designed so that it does not cleave apart in the intestine, keeping more of it in the blood stream for a longer period of time,” he said.

Sontheimer thinks a clinical trial of sulfasalazine in humans is warranted, and sulfasalazine should be considered an adjutant therapy to inhibit seizures in patients with glioma in the meantime.

“While we are waiting for the development of a new drug, the existing one will work to some degree.  It’s nice to have a sharp knife, but a dull one will work,” Sontheimer said.

Sontheimer says the drug might be especially valuable in the early stages of the glioma, when the tumor is small, potentially to slow the progression of the disease and provide for a better quality of life.

About 18,000 Americans develop gliomas each year, and about half will die within 12 months of diagnosis, according to the Society for Neuroscience.

The study was funded by the National Institutes of Health, the UAB Brain Tumor SPORE grant, the Neuroscience Blueprint Core grant and the National Coalition for Cancer Research.