by Jim Bakken
A year after the White House unveiled its fight against the disease, five regional dialogues are being held to monitor implementation.

The White House Office of National AIDS Policy is holding a series of National HIV/AIDS Strategy Implementation Dialogues across the country to examine critical issues and encourage action and collaboration at the state and local levels. The first meeting, focusing on incorporating prevention and care research into HIV programs, is being held at the University of Alabama at Birmingham on Tuesday, Sept. 27, 2011. 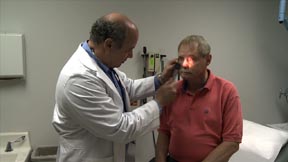 “This is the one event ONAP is holding that is focused on research and they chose UAB. It’s not just about being picked; it’s also a charge to us to deliver on a research agenda,” says Michael Saag, M.D., UAB professor of medicine and director of the UAB Center for AIDS Research.

Saag, who holds the Jim Straley Endowed Chair in AIDS Research, has made seminal discoveries in the genetic evolution of the human immunodeficiency virus in vivo and also directed the first in-patient studies of seven of the 25 antiretroviral drugs developed to fight the virus.

“I hope this gives us a clear roadmap for what needs to be done next, not just here in Birmingham, but elsewhere on a national level to improve our ability to implement what the NHAS is about,” adds Saag, who is the immediate past president of the HIV Medicine Association.

The NHAS has three main goals: reducing new HIV infections, increasing access to care and improving health outcomes for people living with HIV, and reducing HIV-related health disparities. The strategy sets a target of completing these goals by 2015

“I think the NHAS got it right, but now what? Strategies on paper don’t mean anything, they only mean something if they make a difference, if they are implemented, and that is what is happening now,” explains Saag.

In 1994, UAB first used a three-drug combination prescription that would become the highly active antiretroviral therapy that today is the standard of care for treating HIV patients. Now, UAB will be the first Implementation Dialogue site, with the goal of moving the NHAS forward.

The event is free, open to the public, and will take place from 2 to 4:30 p.m. in the Jemison Concert hall at UAB’s Alys Robinson Stephens Performing Arts Center. It will be moderated by Saag and feature opening remarks by UAB President Carol Garrison and Jeffrey S. Crowley, director of the ONAP.

UAB researcher Michael J. Mugavero, M.D., associate professor in the UAB Division of Infectious Diseases, will give the keynote address. Howard K. Koh, M.D., M.P.H., assistant secretary for health in the U.S. Department of Health and Human Services, will also attend. A panel discussion will take place, followed by an opportunity for the audience to ask questions.

For more information or to register to attend a meeting, visit www.whitehouse.gov/blog/2011/09/13/latest-update-registering-nhas-implementation-dialogues.