Has quality of care diminished in private nursing homes?

by Bob Shepard
Is the increasing frequency of nursing homes purchased by private equity firms without a health care background leading to a decline in care?

The acquisition and sale of nursing homes by private-equity firms is a decade-long trend that may reduce the quality of care, says University of Alabama at Birmingham researcher Rohit Pradhan, Ph.D. 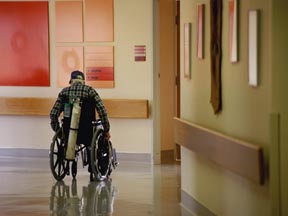 Pradhan, a fellow in the Department of Health Services Administration in the UAB School of Health Professions, received a grant from the National Institute on Aging to study the implications of such transactions.

“These private-equity firms are mainly investors with little to no background in nursing home care,” said Pradhan. “It’s a short investment turnaround for them. They target nursing homes that are financially poor, and then sell them for a profit. I want to know if this has sacrificed quality for short-term profits.”

A Government Accountability Office report released in 2010 documented that private-equity investments in nursing homes have increased exponentially during the past decade. By 2009, private equity owned 1,800 of the 16,000 nursing homes operating nationwide. Pradhan will compare quality and financial performance in nursing homes acquired by private equity firms to publicly owned ones in five states that have seen the greatest increase in such acquisitions: New York, California, Texas, Florida and Illinois.

“We’re dealing with a vulnerable population,” said Pradhan. “There are 1.4 million Americans living in nursing homes, and that number will continue to increase as the population ages.”

Pradhan says ownership structures for these private nursing homes are very complex. For example, one company could own the license while another company owns the physical facility, which makes it hard to pursue legal remedies.

The results of the study could have policy implications. “Policymakers may have to look into private-equity acquisitions to see if there is a need for more rigorous regulations,” said Pradhan. “It could be that nursing-home operators are forced to clearly establish ownership structures and not be allowed to escape liability if any harm is done to residents.”