Freshman biomedical engineering major William Hucke is better known for the green man suit he wears at football games than for his unique connection to the University of Alabama at Birmingham. But he doesn’t mind telling fellow students the reason he came here from Maryland: UAB is responsible for his very existence. 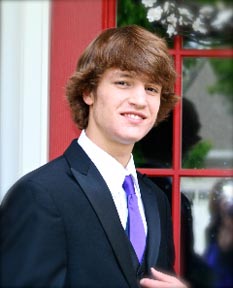 Hucke, 19, is the result of the first successful pregnancy and birth from a frozen embryo by the UAB Division of Reproductive Endocrinology and Infertility. He was born Oct. 6, 1992.

It all started in 1990 when UAB alumna Natalie Hucke, who was unable to conceive, wanted children with her husband Bill. From her home in Savannah, Ga., she researched the best medical centers for infertility treatment in the South and turned to UAB for in vitro fertilization.

“I generated a lot of eggs on the first cycle. Six embryos were implanted, and they didn’t take. I was devastated,” she says.

Hucke’s remaining embryos were frozen with hope they could be used later. But, while dealing with the failure of the first attempt and a work-related move to New Orleans, they didn’t try to become pregnant again for another year and a half.

“We were warned the second time around there had not been a successful pregnancy and birth with frozen embryos at UAB, but we were willing to try,” she says.

The remaining embryos were implanted and Natalie Hucke became pregnant with William. His birth in 1992 became part of UAB history.

The science and success with fertility treatments have come a long way since William was conceived, says UAB IVF director Wright Bates, M.D. The chance of a pregnancy following IVF is much higher now with fewer embryos transferred and less risk.

“Today, most couples have an excellent chance of having a healthy baby with IVF, and pregnancy using frozen embryos is commonplace. We also routinely perform testing of embryos for genetic diseases and offer fertility preservation for women and men facing cancer, ideas that were far-fetched when William was conceived,” Bates says.

Fast-forward 18 years. High-school senior William Hucke, now considering where he would attend college, was offered a Green & Gold academic scholarship at UAB, which he knew had well-respected engineering and medical schools. He also knew his mom was an alumna.

“I’ve always known parts of the story about how I came to be, but it wasn’t until I decided to come to UAB this past summer that my parents told me the whole story,” Hucke says. “I have family in Birmingham, and I knew the biomedical engineering program is one of the best. Knowing the full story just strengthened my decision. My parents were very supportive.”

Dropping William off move-in day was nostalgic for Natalie and Bill.

“Though the campus has changed, it was definitely reminiscent of the day I came to UAB as a freshman,” she says.

For William, it was something more.

“I feel like I fit in here. When you think about it, this is where I am truly from; it feels good to be here.”