Runner hurdles epilepsy in his race to Olympic dream

Bill Matthews has a dream. A distance runner, Matthews wants to challenge himself on the world’s greatest, most competitive athletic stage — the Olympics. But to make the U.S. Olympic team is no easy matter. It takes drive, will power, talent and effort. Matthews says he’s got those traits in abundance. And he also has epilepsy. 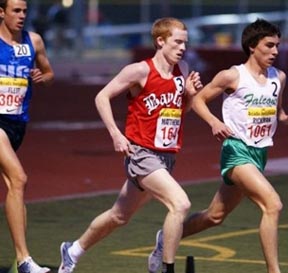 Matthews, a Birmingham native and college sophomore, is a patient of the University of Alabama at Birmingham’s Epilepsy Center under the care of LeBron Paige, M.D.

“For most people, epilepsy is a millstone around their necks, interfering with everything they do, or want to do,” said Paige, an assistant professor in the Department of Neurology. “Bill Mathews is wearing this millstone while running races.”

Matthews has some street cred in running circles. He was a three-time, high-school All-American runner, winning 10 individual state titles while at the Baylor School in Tennessee.  He was the Tennessee Gatorade Player of the Year as a senior and won the Southeast Foot Locker Regional contest in 2008.  He earned All-SEC Freshman honors in cross-country at the University of Georgia during his first year of college.

But Matthews also has epilepsy.

Matthews’s first seizure came when he was 6 years old. Then nothing — for years. The next seizure struck Aug. 10, 2010. Bill was in his Georgia dorm room prepping for a run.

“I really didn’t know what it was,” he recalls. “I was so young the first time, I didn’t remember. I thought I was having a stroke or a heart attack. I really thought I was going to die.”

His buddies got him to a hospital in Athens, and he then made his way back home to Birmingham and Paige.

“We’re trying different medications and adjusting dosages gradually,” said Paige. “The challenge is to keep him performing at an elite athletic status, minimizing side-effects while hopefully keeping him seizure-free.”

The side-effects of epilepsy medications are not conducive to running to the corner, much less Olympics competition. They include fatigue, lethargy, loss of mental focus and dizziness. Matthews had one more major seizure since going on medication and still has some minor epileptic episodes. Until those are eliminated, trainers at Wake Forest University, where Bill now is on the cross-country and track teams, have not cleared him to compete. Paige says those obstacles can be overcome with time.

“If we can eliminate the seizures and keep the side-effects to a minimum, there’s no reason he can’t perform at a high level,” said Paige.  “One of the keys is that he’s managing his condition well, taking charge and taking ownership.”

“Dr. Paige invests time and energy working with me to eradicate this health issue from my life,” said Matthews.  “I enjoy being able to talk with him about the different approaches we can take to keep epilepsy from interfering with my goals.”

Matthews credits Wake Forest Coach Brad Hunt for understanding the issues he faces and working with Paige on a treatment regimen that will allow Matthews to get back on the track. One of the reasons Matthews went to Wake Forest was for cooler temperatures. Heat seems to be a trigger for his seizures, along with sleep deprivation, stress and low blood sugar.  For a college student, lack of sleep, stress and poor diet would seem to be the norm, so Matthews has got his work cut out for him.

“I know I’ve got to take care of myself, follow the treatment regimen and avoid my triggers,” he says. “My goal is to get a handle on my epilepsy, continue training and shoot for the 2016 Olympics in Brazil.”

So Matthews and Paige continue to tinker with medication levels, and Matthews keeps a close eye on his responses and reactions. And he keeps running. Training for the day he hopes will come — when he can run for his country against the best in the world in Brazil.

Even though he has epilepsy.