Steroids increase viability of preemies as young as 22 weeks

A low-cost intervention gives even the earliest preemies a chance to survive and thrive.

With chubby cheeks and weighing in at a healthy 10 pounds, the imminently huggable Lexi Morrison is far removed from the 1-pound, 9 –ounce preemie she was in June when she was born premature at 24 weeks.

And had it not been for antenatal corticosteroids provided by the University of Alabama at Birmingham Hospital’s Regional Neonatal Intensive Care Unit, Lexi’s story might have ended badly for her and mom Laci Freeman.

Giving antenatal corticosteroids in extremely preterm infants like Lexi — those born between 22 and 25 weeks gestation and weighing less than 2 pounds — is associated with significant reductions in death and long-term complications such as neurodevelopmental impairments, including cerebral palsy, poor motor skills and lower intelligence, according to research by Wally Carlo, M.D., director of the UAB Division of Neonatology, published in the Dec. 7, 2011, issue of the Journal of the American Medical Association.

Freeman knew she was at risk for premature labor; doctors placed a stitch in her cervix to keep it closed when she was 20 weeks pregnant, and she immediately went to the hospital when she began bleeding at 23 weeks. Several days later, at 24 weeks and two days, Lexi was born.

“I had problems before, and I lost a premature baby. I didn’t want it to happen again,” Freeman says. “They asked me if I wanted to use the steroids and I told them yes — whatever is better for Lexi I want to do it. They got two (doses) in me before she was born.”

Antenatal corticosteroids, when given to a woman in preterm labor, mature the lungs and other organs in the baby’s body. Two shots of the steroids have been recommended for women in premature labor as early as 24 weeks, but there were no data for 23 weeks or earlier gestation from randomized, controlled trials, Carlo says. And the data was quite limited in trials for pregnancies between 24 and 25 weeks.

“There also was very limited data on long-term outcomes for these babies; this is significant because it is important to increase survival and also to increase the quality of life,” he says. “We wanted to study the smallest premature babies because this is a very large population of infants, but the practice of giving antenatal corticosteroids to women at these gestational ages differs from physician to physician.”

Carlo also says there have been concerns about giving antenatal corticosteroids to some women in early premature labor, especially those susceptible to infection, because steroids lower the body’s ability to fight infection.

The study, funded by the Eunice Kennedy Shriver National Institute of Child Health and Human Development and conducted by Carlo for the Neonatal Research Network, used data collected prospectively on babies born between January 1993 and January 2009 at 22 to 25 weeks gestation weighing between just under a pound to 2 pounds at 23 academic medical centers across the country. Carlo and his research team ultimately wanted to determine if antenatal corticosteroids worked as well in early premature babies, even in the long term, as they do in babies born at 26 weeks gestation and older. 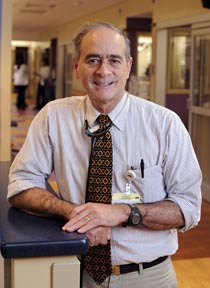 “The results of the study showed that mortality was decreased by more than 33 percent and neurodevelopmental impairment was decreased by more than 20 percent,” Carlo says. “It seems that extremely premature infants, from 22 to 25 weeks, can respond as well as infants that are more mature. We also found that using the antenatal corticosteroids did not increase the infection rate for the mothers.”

Carlo says the study is important because it shows that a low-cost intervention, about $25 for two shots, gives even the earliest preemies a chance to survive and thrive.

“Delivery of a normal baby is an emotional occasion, and delivery of a premature baby is even more emotional. The ability to tell parents there is a treatment that has such major benefits is very comforting,” Carlo says. “They know there is something that can be done.”

Freeman is grateful for the opportunity at life antenatal corticosteroids gave her daughter.

“It was very easy, simple,” she says. “I’m very grateful. I thank God every day for it.”