Whether it’s over the river and through the woods to grandma’s house for Christmas or joining thousands in Times Square to rock New Year’s Eve, millions of people will take to the skies and the highways this holiday season. But for diabetics, travel can be dangerous if they’re not careful. 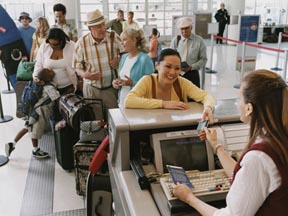 “I tell patients, especially Type I diabetics, to be diligent about blood-sugar control when they travel — especially across time zones — because it’s easy to lose control of your glucose management when you get out of your usual routine,” says Fernando Ovalle, M.D., director of the UAB Multidisciplinary Diabetes Clinic and a senior scientist in the UAB Comprehensive Diabetes Center.

Carry on - Flying travelers should pack at least one set of medication and supplies in a carry-on bag so that your medication is always with you; checked luggage can be lost. “Keep this carry on with you at all times,” Ovalle says. “If it snows and you are stuck in an airport, you may not be able to leave to get to a local pharmacy for replacement supplies.”

Document for security - Get two papers from your doctor: a letter and a prescription. The letter should explain the treatment for your diabetes, such as “take diabetes pills or insulin shots.” It also should list insulin, syringes and any other medications or devices you use. “This can help avoid air travel hassles and delays when dealing with airport security,” Ovalle says.

Prepare for change - If you are traveling across time zones, start adjusting your medication times for insulin in increments in the days leading up to your trip to help soften the blow of the time change. “If you are traveling somewhere there is more than a four-hour time difference, ask your doctor to devise a new dosing schedule to avoid making a mistake and stacking, or taking too much, insulin,” Ovalle says.

Move, move, move - Finally, if you are traveling long distances, make sure you move around or get out and walk at least every hour or two. Diabetics are more prone to blood clots, and movement can prevent clots from forming.

Pump check - Ovalle also cautions those on insulin pumps to be careful when flying. Recent studies have shown changes in cabin pressure during flights can cause insulin pumps to deliver too much insulin when the plane is ascending, putting sensitive diabetics at risk. “Individuals with diabetes who are extremely sensitive to insulin may want to consider disconnecting the device before taking off and while the plane is ascending, as well as checking the insulin supply for air bubbles upon landing” he adds.

Ovalle says the best tip when traveling is to use common sense.

“With the technology we have today – cellphones, personal glucose meters, electronic pharmacy communication – traveling today is much easier than it was even 30 years ago. Simply by paying attention to the necessary details, someone with diabetes can go just about anywhere they want to go.”