Teaming up to fight cancer

The third annual Bartow Classic on Jan. 7 will raise funds for cancer research.

The UAB Comprehensive Cancer Center and UAB Men's Basketball are teaming up Saturday, Jan. 7, 2012, for the third Bartow Classic, a fundraiser for the Coach Gene Bartow Fund for Cancer Research. 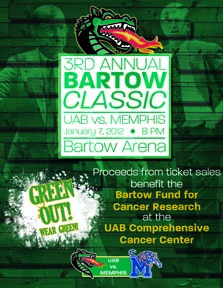 The game, sponsored by UAB Medicine, against Memphis will tip off at 8 p.m. and recognizes former UAB Men’s Basketball Coach and Athletics Director Gene Bartow for his decades of commitment to UAB and intercollegiate sports. The event also is designed to raise awareness of the importance of supporting cancer research and patient programs at UAB. Bartow, who retired from collegiate coaching in 1996, is undergoing treatment at the UAB Comprehensive Cancer Center for stomach cancer.

UAB Athletics will donate $2 for every ticket sold (excluding season tickets) to the Coach Gene Bartow Fund for Cancer Research, which was established in December 2009. Tickets for the game, which will be nationally televised on CBS Sports Network, are $27 for lower level reserved seats and $22 for upper level reserved seats and can be purchased online at UABSports.com or by calling 205-975-UAB1 (8221).

Bartow, considered by many as the “founding father” of UAB athletics, was the UAB director of athletics from 1977 until his retirement in 2000. He developed an intercollegiate sports program at UAB from infancy into one that features 17 sports. He also helmed the UAB Men’s Basketball program for 18 seasons, 1978 to 1996, where he led the team to 14 postseason appearances, 10 of which were in the NCAA Tournament. In 1997, UAB renamed its basketball venue in his honor.

Bartow still ranks in the top 20 among winningest NCAA Division I basketball coaches and was inducted into the National Collegiate Basketball Hall of Fame in November 2009. He also has ties to the Memphis program; he coached the Tigers from 1970-74 and led then-Memphis State to three consecutive post season appearances.