The University of Alabama at Birmingham is part of two, multi-site clinical trials to evaluate treatments for out-of-hospital cardiac arrest to improve survival rates. The trials are sponsored by the National Institutes of Health. 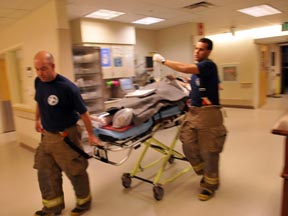 One study will compare continuous chest compressions combined with pause-free rescue breathing to standard cardiopulmonary resuscitation. The other trial will compare treatment with the drug amiodarone, another drug called lidocaine or a salt-water placebo in participants with shock-resistant ventricular fibrillation, a condition in which the heart beats chaotically instead of pumping blood.

“Although immediate CPR can be lifesaving, more than 90 percent of people who experience a cardiac arrest outside of a hospital die before reaching a hospital or soon thereafter,” said Jeffrey Kerby, M.D., Ph.D., UAB trauma surgeon and lead investigator at UAB. “The goal of both of these trials is to reduce that number.”

“Increasing survival rates for people who experience out-of-hospital cardiac arrest is a major public health goal,” said Susan B. Shurin, M.D., acting director of the NIH’s National Heart, Lung, and Blood Institute, which is the lead federal sponsor of the studies.  “These new trials could provide critical insight about which resuscitation efforts are most effective for cardiac arrest.”

The majority of the approximately 350,000 people who have cardiac arrest in the United States each year are assessed by emergency medical service providers. The heart stops beating during cardiac arrest, and the person usually dies unless it is restarted within minutes.

The trials will serve a combined population of nearly 21 million people from diverse urban, suburban and rural regions across the United States and Canada, including people across Jefferson County, Ala.

The first study, referred to as the CCC trial, will compare survival-to-hospital-discharge rates for two CPR approaches delivered by paramedics and fire fighters. Persons experiencing cardiac arrest will be randomly assigned to receive continuous chest compressions or standard CPR by emergency responders. Standard CPR, the approach recommended by the American Heart Association for use by emergency responders, includes chest compressions with short pauses for assisted breathing.

This approach has been called into question by emerging data suggesting that stopping chest compressions to provide assisted breathing interrupts overall blood flow, thereby lowering survival. Previous studies have shown that people who suffer cardiac arrest outside of the hospital and are treated by bystanders are more likely to survive when given compressions alone.

The CCC trial will enroll up to 23,600 participants at eight regional locations across the United States and Canada.

The second study, known as ALPS, will determine if amiodarone or lidocaine improves survival-to-hospital-discharge rates for participants with shock-resistant ventricular fibrillation.  Participants will receive one or the other drug or a placebo.

About 25 percent of cardiac arrests are due to ventricular fibrillation. When shock treatment with a defibrillator fails to restore normal heart rhythm, medications such as amiodarone or lidocaine are often given, but their effectiveness in improving survival is unknown. This trial will enroll up to 3,000 participants at nine locations across the United States and Canada.

Both trials are part of the NIH-supported Resuscitation Outcomes Consortium, the first large-scale, clinical research network in the world designed to study, improve and standardize the way EMS teams deliver very early, pre-hospital interventions to improve patient survival after cardiac arrest or trauma.

The NHLBI is the lead federal sponsor for both of the new studies, and the U.S. Army Medical Research and Materiel Command is a federal co-sponsor. Additional funding is provided by the Canadian Institutes of Health Research, the Heart and Stroke Foundation of Canada, the Defense Research and Development Canada, and the AHA.