UAB will launch a new internal medicine residency program in Huntsville this summer to help meet the growing need for primary-care physicians.

Huntsville Hospital and the University of Alabama at Birmingham will begin a new residency program in July to train internal medicine physicians in Huntsville. The new residency slots were granted by the Center for Medicare and Medicaid, which oversees graduate medical-education programs. 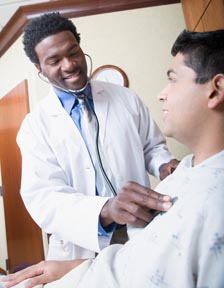 “Our community is growing, and so is the need for primary-care physicians,” said Huntsville Hospital CEO David Spillers. “This could not have come at a better time. This is a major step in serving patients in Huntsville and throughout the region.”

The residency, which will be in operation by July, will begin with 16 physicians — eight first-year residents and eight in their second year of training. In July 2013, an additional eight physicians will be admitted. In time, the program will have 24 physicians in training.

The program already has received accreditation, said Robert Centor, M.D., associate dean for the Huntsville Regional Medical Campus of the UAB School of Medicine. “Our application to the American College of Graduate Medical Education was endorsed and supported by the Dean’s Council on Graduate Medical Education of the UAB School of Medicine,” he said.

Huntsville Hospital and UAB have operated a family practice residency program since 1973. With the new internal medicine residents, there will be 60 physicians in training at the Huntsville campus.

“Most people don’t realize the pipeline of quality physicians we have established here,” Spillers said. “The graduates of the family practice residency have been a vital part of our medical community for a long time. With the additional physicians from our new program, the impact on health care in our community and region will last for decades.”

The program will be the only such training program for internal medicine between Birmingham and Nashville. In addition to the residency programs, UAB’s Huntsville campus, which is located in the medical district, offers medical education to 70 students who are in their third and fourth years of medical school.