Though the mild winter that graced most of the country was a blessing for the cold-haters of the nation, it’s not without consequences — pollen already is blanketing cars and gathering in piles in parking lots, signaling an early start to the spring allergy season. 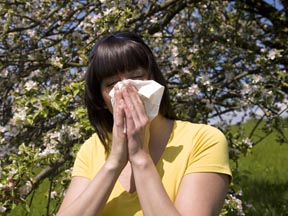 “We’re seeing many more problems with allergies this season because of the warm winter and early bloom,” says UAB internist and pediatrician Stephen Russell, M.D. “The most common complaints are itchy noses, watery eyes and sneezing.”

Russell says seasonal allergies are fairly easy to treat but a little harder to prevent. Most people who react to the pollen in the air can be treated with over-the-counter medications.

“Many of the prescriptions we used to reach for in our prescription pad now are available over the counter,” he says. “They’re extremely safe and very well tolerated, even in children in their youngest years.”

Neti pots are another way to relieve the symptoms of seasonal allergies if used properly, Russell says.

“Neti pots can be helpful in removing some of the allergens that cause the runny nose and allow people to breathe and feel better, and neti pots are safe,” he says. “Just make sure to use a water source that’s filtered, such as the water that is coming through your faucet, and clean them after each use, to prevent bacteria from getting into them.”

Should you see your doctor?

Russell says if you experience anything more than mild symptoms it could signal a larger allergy issue, and you should see a physician.

“Your physician can help guide you in the things that can be done to relieve your allergy symptoms,” he says. “Some people benefit from allergy shots provided in an allergy specialist’s office,” he says.

“We think of allergies in two different ways — those that are seasonal and those that are environmental. Seasonal allergies tend to happen in warm weather when plants and trees start to bloom, but they can happen any time of the year. When the leaves fall we see people who have a runny nose and sneezing,” he says.

“Environmental allergies can develop any time,” he says. “People who spend a weekend in their attic or garage cleaning may have allergies they may not have at other times of the year. If you have any symptoms such as shortness of breath or difficulty breathing after an exposure, you should talk to your doctor.”

Russell says staying ahead of the seasonal allergy helps lessen its impact.

“The best thing you can do is be aware of your symptoms and try to minimize your exposure to the pollen and allergens that are out there,” he says.