Study says findings could be a game-changer for patients, helping doctors determine when to perform surgery and providing better long-term outcomes.

Using MRI analysis with 3-D imaging instead of a traditional echocardiogram could help physicians better manage patients with mitral regurgitation and better predict when surgery for the condition is necessary, according to a study co-authored by University of Alabama at Birmingham researchers and published in the May 15, 2012, issue of Circulation. 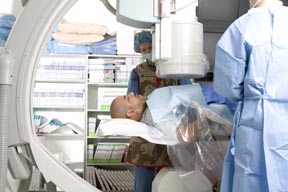 “These findings could be a game-changer for patients,” says senior author Mustafa Ahmed, M.D., of the UAB Division of Cardiovascular Disease. “More than 2 million people in the United States suffer from mitral regurgitation, which occurs when the mitral valve fails to close properly and blood that is supposed to be pumped out of the heart flows back. The number of people with this likely will double by 2030 because of aging and population growth.”

Guidelines now recommend using an echocardiogram to measure the dimension of a single spot in the left ventricle as each heart beat pumps blood out of it to see whether or not the regurgitation has caused the ventricle to dilate beyond what is acceptable and to detect decreased function in the ventricle. Both of these help physicians decide if surgery is needed to correct mitral regurgitation. But, Ahmed says, this single measurement fails to provide a full picture of the health of the whole ventricle, and significant changes in its size and geometry can be missed.

“A conventional echo measures what you could consider an ice pick-like dimension at the base of the heart,” says study co-author Louis Dell’Italia, M.D., of the UAB Division of Cardiovascular Disease and Birmingham Veterans Affairs Medical Center. “MRI and 3-D analysis measures this dimension and it also shows the change from the normal football shape to a spherical shape of the entire heart, known as remodeling. Such a global picture provides an accurate volume of the heart, which previous research suggests is the best predictor of the patient’s outcome.”

For the study, the researchers looked at 94 patients with severe to moderate mitral regurgitation from June 2005 to September 2010. In addition to an echocardiogram, the patients each had an MRI scan and 3-D analyses. Thirty-five of the mitral regurgitation patients underwent mitral valve repair surgery; all of these patients had a relatively well-preserved left ventricle ejection fraction — the amount of blood the heart can pump out.

The researchers report the MRI with 3-D analysis uncovered more spherical remodeling of the heart than the standard echocardiographic dimension, and significant remodeling was associated with poorer heart-function outcomes. These findings, the researchers say, suggest that the volume of the heart plays an important role in outcomes following surgery and should be considered when evaluating patients for a surgical intervention to treat mitral regurgitation.

“Using the MRI with 3-D analysis, we are able to get a better handle on the way the heart is remodeling due to mitral regurgitation and that can better help us determine the optimal time to operate on a patient,” Dell’Italia says. “Using this marker for surgical intervention could improve heart function after valve surgery. Though the sample size for the study was small, it should open a dialogue about changing treatment guidelines to include using MRI scans or newer echocardiographic methods that include a 3-D analysis of the heart.”

Ahmed adds that opening this dialogue is important because 25 years ago, using mechanical valves that required a patient to take blood thinners for the rest of their lives was the only option so surgery was delayed as long as possible. Now, with advancements in valve repair technology that include both minimally invasive and robot-assisted valve surgery to place valves that are now made of tissue — options which are offered by UAB heart surgeons — the risks associated with surgery are less.

“Because the 3-D analysis demonstrated significant left ventricular remodeling even when echocardiographic dimension was within the current guidelines, it raises the question whether we should be more aggressive in treating these patients with surgery,” he says. “We need to ask if we should we be operating earlier based on changes in the geometry of the heart and not just the dimension at the base of the heart?”

The research was supported by funding from the National Institutes of Health’s National Heart Lung and Blood Institute Specialized Center of Clinically Oriented Research in Cardiac Dysfunction program.