Gap exists between seniors’ opinion of driving ability and performance

UAB study finds majority of older adults rate themselves as excellent drivers though one in four had a wreck in previous five years. 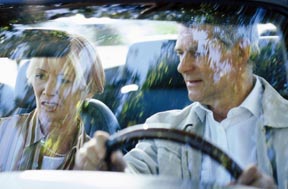 The study, by researchers at the University of Alabama at Birmingham and published in Accident Analysis and Prevention, analyzed Maryland Motor Vehicle Administration data from 350 older adult drivers ages 65-91 with a mean age of 74. The drivers were asked about self-reported incidents and state-reported crashes during a five-year period. They also were asked to rate their own driving abilities at year five. The study found that self-rated driving ability had no relationship with a previous history of adverse driving outcomes, such as crashes, other than receiving recommendations from physicians or friends to stop or limit driving.

The study also found older men are more likely to have adverse driving outcomes, but that they were not more likely to be told by physicians and friends to stop or limit their driving.

“A large debate in driving research is whether or not at-risk drivers can self-regulate, and thus possibly reduce their crash risk. This research indicates that, at least for this sample, a previous history of four adverse driving outcomes has no relationship with self-reported driving ability, thus possibly indicating a lack of awareness in regards to driving abilities,” says Lesley Ross, Ph.D., author of the study and assistant professor in the UAB Department of Psychology. “The majority of older adults can continue to drive safely well into old age. However, there is a group of older drivers who are at greater risk for crashing.”

Driver license requirements for seniors vary by state. According to the Insurance Institute for Highway Safety eight states and the District of Columbia require vision tests for seniors. Illinois is the only state that mandates a road test for those ages 75 and older. This means that all other states rely on seniors to self-regulate their driving.

“Testing visual acuity is not enough to predict crashes. The screenings that show true promise in determining whether or not a senior is able to drive safely are performance-based,” says Ross. “Until that happens, we found that receiving a suggestion to stop or limit driving had the greatest impact on seniors self-rated driving abilities.

“Clearly, there needs to be more open discussion among older adults, their family and friends, as well as physicians. Driving is essential to maintaining independence and mobility for many older adults, and discussions on limiting driving should not be taken lightly.  It is a complex issue with real implications for older adults and their families,” Ross says.

The National Highway Traffic Safety Administration says there were 32.3 million drivers over the age of 65 on the road in 2008 and they expect that number to surpass 40 million by 2020. A recent study using data from the National Automotive Sampling System’s General Estimates System revealed older drivers experience severe injuries and fatalities at a higher rate than any other age group.

Ross’ work is supported by the National Institutes of Health’s National Institute on Aging. Her co-authors are Joan E. Dodson, Jerri D. Edwards, Ph.D., Michelle Ackerman and the chair of the psychology department, Karlene Ball, Ph.D.