Add an increased risk of stroke to the list of health problems caused by sleeping fewer than six hours a night.

Getting a good night’s rest continues to be of utmost importance to your health. New data from researchers at the University of Alabama at Birmingham shows too little sleep can increase the risk for stroke symptoms in people with a healthy body-mass index who are at low risk for obstructive sleep apnea and have no history of stroke. 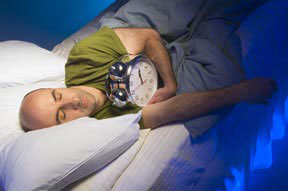 The study, being presented June 11, 2012, at the SLEEP 2012 conference in Boston, looked at self-reported sleep data from 5,666 people ages 45 and older who were followed up to a three-year period. In people with a low risk for obstructive sleep apnea and a BMI of 18.5 to 24.99, which is considered optimal, there was a four-time greater risk of stroke symptoms in participants who had fewer than six hours of sleep per night, compared to participants in the same BMI range who got seven to eight hours of sleep per night. The study found no association between short sleep periods and stroke symptoms among overweight and obese participants.

“We adjusted for many possible factors that could explain this increase, including hypertension, high cholesterol, sleep disordered breathing and being overweight or obese,” explains Megan Ruiter, Ph.D., the study’s lead author and a UAB post-doctoral fellow in the Division of Preventive Medicine in the School of Medicine.

“Despite controlling for other known stroke risk factors, we still found the association between sleeping less than six hours and reporting stroke symptoms, like sudden body weakness or numbness or deficits in vision,” says Ruiter. “These participants may be late in the development of a stroke. It is possible they may have had a stroke but it was not verified with a physician.”

Sleep specialist Susan Harding, M.D., who was not involved with this study, says these findings do not surprise her.

“Short sleep duration is already associated with cardiovascular death and other cardiovascular related events,” says Harding, director of UAB's Sleep/Wake Disorders Center. “What is different with this study is that it specifically looked at people who are at a normal weight, which means they are less likely to have diabetes — which is a stroke risk factor — and found they are still at increased risk of stroke symptoms.”

The study also found a differential risk according to racial group.

“We find that sleep duration might partially explain the relationship between ethnic differences in stroke symptoms,” Ruiter adds. “African-Americans had a greater prevalence of short sleep, and they were more likely to have stroke symptoms.”

Ruiter notes that sleep duration was self-reported by participants, making it a limitation of the study, as recall accuracy can vary.

“We need to see if sleep duration is related to actual stroke events. It would be great to learn more about what it is about sleep duration. Is it actually sleep fragmentation, or perhaps the perception of your sleep and the factors that contribute to its quality rather than sleep duration itself? These are all really important factors that are modifiable through behavioral treatment,” says Ruiter.

Data used for this study comes from the Reasons for Geographic and Racial Differences in Stroke study, led by George Howard, DrPH, of the UAB School of Public Health. REGARDS enrolled 30,239 people ages 45 and older between January 2003 and October 2007, and it continues to follow them for health changes. The study is funded by the National Institute of Neurological Disorders and Stroke.