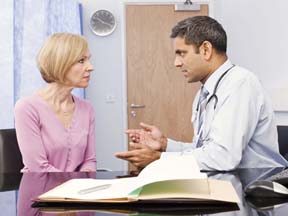 Research from the University of Alabama at Birmingham and other medical centers published in the June 21, 2012, New England Journal of Medicine shows that adding a “midurethral sling” to lift and support the urethra during surgery to repair pelvic organ prolapse reduces the chances of developing stress urinary incontinence. However, the procedure carries greater risk of complications than previous techniques.

Pelvic organ prolapse occurs when organs, such as the bladder or uterus, protrude through the pelvic wall due to weakened musculature and can cause stress urinary incontinence, the leakage of urine brought on by laughing, sneezing or running. It is fairly common, and often is caused by pregnancy or childbirth. According to the study, one in five women is a candidate for surgical repair of the condition.

“However, the majority of prolapse repairs are now performed transvaginally, instead of through the abdomen, and midurethral slings, which are minimally invasive, have largely replaced bladder-neck suspensions,” says study co-author Holly E. Richter, Ph.D., M.D., professor of obstetrics and gynecology and the J. Marion Sims Endowed Chair in Obstetrics and Gynecology and director of the UAB Division of Urogynecology and Pelvic Reconstructive Surgery.

At least a quarter of the women who have surgery for pelvic organ prolapse will develop incontinence as a result of the surgery, the study says.

Richter, who is also president-elect of the Society of Gynecologic Surgeons, says the study sought to determine if adding the sling during vaginal prolapse surgery would reduce the risk of incontinence as much as the bladder-neck suspensions did with the abdominal procedure.

Richter and colleagues from seven other clinical sites designed the Outcomes Following Vaginal Prolapse Repair and Midurethral Sling clinical trial to determine the prevalence of urinary incontinence, as defined by a positive stress test (leakage with a full bladder with coughing or straining), bothersome urinary incontinence symptoms (a patient’s complaint of urinary leakage) or urinary incontinence treatment at three and 12 months after prolapse surgery, whether the women received a midurethral sling or not. The researchers also looked at serious adverse events, common complications attributable to slings, and unexpected adverse events.

Of the 337 women who participated in the trial, 165 had a vaginal prolapse repair and a midurethral sling placed and 172 had a vaginal prolapse repair but did not have a sling placed; 327 completed follow-up at one year. At three months, the rate of urinary incontinence was significantly less in the sling group, 23.6 percent compared to 49.4 percent in the group that did not have a sling placed. At 12 months, this benefit was maintained with urinary incontinence present in 27.3 percent and 43 percent of patients, respectively.

“While placement of the sling in women undergoing vaginal prolapse repair significantly improved continence outcomes at three and 12 months, using a sling in these women also increases the likelihood of these types of complications, although the majority of them resolve,” Richter says.