by Beena Thannickal
Hardy has served in multiple positions with the Komen foundation. 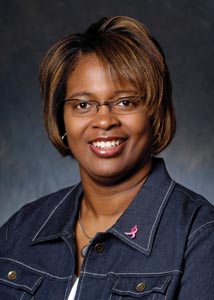 Claudia M. Hardy, M.P.A., program director of the UAB Comprehensive Cancer Center’s Deep South Network (DSN) for Cancer Control, has been appointed president of the board of directors of the North Central Alabama Affiliate of Susan G. Komen for the Cure.

Hardy specializes in minority health issues with an emphasis on cancer health disparities, including community-based participatory research, access/barriers to health care and community capacity-building. Hardy has been instrumental in developing the Community Health Advisor (CHA) model, which identifies natural helpers in the Deep South communities to educate their families, friends and neighbors about cancer. She has trained more than 1,700 CHAs and her work has help reduce the disparity in mammography screening rates from 17 percent to .25 percent among the Medicare population in the DSN’s targeted areas.

In 2007, Hardy was nominated to serve a three-year term on the Susan G. Komen for the Cure African-American National Advisory Council and later transitioned to the newly formed Komen National Multicultural Advisory Council. She also is on a number of community organization boards, including the American Cancer Society Mid-South Division and the United Way of Central Alabama Grants Allocation Committee.