With no West Nile vaccine in sight, self-protection is key

As this year’s threat from the West Nile virus continues, one infectious diseases expert at the University of Alabama at Birmingham says a vaccine is not in our near future, so people need to protect themselves. 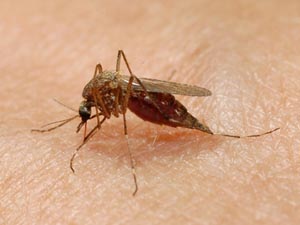 The virus, most often spread by the bite of an infected mosquito, can lead to West Nile fever or severe West Nile disease. As of Aug. 28, 2012, WNV infections have been reported in 48 states, with a total of 1,590 cases in people, and 66 deaths, according to the Centers for Disease Control and Prevention.

“West Nile comes and goes,” explains Qianjun Li, Ph.D., assistant professor in the Division of Infectious Diseases in the UAB Department of Medicine. “It peaked in Alabama in 2003 with 37 cases and three deaths; in 2007 there were 24 cases and three deaths in Alabama. Now it’s back again throughout the United States.” The virus “can be a big threat to us and we can’t track it because the pattern changes year to year,” Li adds.

Li’s research focuses on mosquito-transmitted viruses, such as yellow fever, dengue fever and WNV. His main focus is on anti-viral drug discovery, screening for lead compounds or potential drugs to treat these diseases.

“There are human vaccines for WNV in the clinical trial phase, but with the typically low incidence level, it is challenging to get funding to develop these vaccines,” Li explains.

Li attributes this year’s spike to last year’s mild winter. “Those warmer temperatures allowed for the mosquitoes to survive and continue populating into the spring,” he says.

WNV can continue spreading into the fall, says the CDC. Without a vaccine available and the mosquitoes here to stay for the time being, David Kimberlin, M.D., UAB professor of pediatrics and president-elect of the Pediatric Infectious Diseases Society, says the best thing you can do is protect yourself.

“Even though most of the cases are coming from six states — Texas, South Dakota, Mississippi, Oklahoma, Louisiana and Michigan — people everywhere need to consistently use mosquito repellant containing DEET,” Kimberlin explains.

And while this year’s WNV incidence is the highest seen since 1999, Kimberlin says it should not be a cause for alarm. “I don’t think people should be any more or less concerned because the reporting of cases is increasing — this is just indicating that we have a more severe season than usual this year.”