by Jim Bakken
Be immunized against the flu every year to protect yourself and those around you.

As temperatures begin to cool, coughing and sneezing inevitably follow. So begins flu season in the United States — and preventable deaths — says David Kimberlin, M.D., University of Alabama at Birmingham professor of pediatrics and president-elect of the Pediatric Infectious Diseases Society. 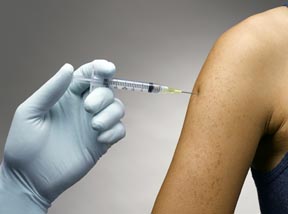 “Each year, an average of 24,000 people in the U.S. die from flu during the flu season; that is enormous,” says Kimberlin, who co-directs the UAB Division of Pediatric Infectious Diseases.

Kimberlin says it is too early to forecast the extent of this flu season, but he cautions people to protect themselves.

“Regardless how severe a flu season is predicted to be, people should be concerned every year. They should get their annual flu shot anytime the flu vaccine is available. If you haven’t yet done so, stop and get it,” Kimberlin says.

“The strains that are circulating in the 2011-12 season are the same strains circulating this past year,” Kimberlin says. “That’s the first time that has happened in a very long time.”

That means there is no shortage of the flu vaccine. “We have a good supply already, so we have the best opportunity to protect the U.S. population from this deadly disease,” Kimberlin explains.

One of the strains included in this year’s influenza vaccine is H1N1, a pandemic strain that infected close to 61 million people in 2009, according to the Centers for Disease Control and Prevention.

During the 2010-11 flu season, 115 children died of flu-related causes, according to the CDC’s Morbidity and Mortality Weekly Report; less than a quarter of them had received the flu vaccine, and nearly half of them were age 5 and younger.