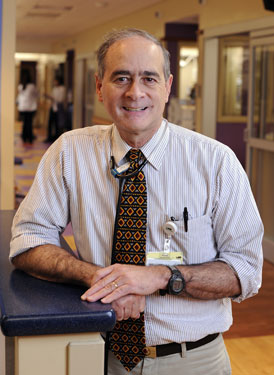 As a leading clinician and researcher in the prevention of infant death, University of Alabama at Birmingham neonatologist Waldemar A. Carlo, M.D., is on the front lines every day saving newborn babies — much like the founder of the field of neonatology, Virginia Apgar, M.D.

Apgar is best known as the developer of the Apgar score, which is assigned to babies worldwide as a measure of their health status at birth. Carlo is an internationally respected neonatologist known most recently for his research in newborn care training for physicians and midwives to prevent infant deaths in developing countries, and for his career-long research endeavors into the best ways to provide respiratory support to even the smallest preemies. The advances he has led, just like those Apgar made, are responsible for helping to save millions of lives every year.

“This award is a recognition of the many mentors, collaborators and colleagues who have provided me with a nurturing environment and opportunities to develop and evaluate innovative interventions to reduce infant mortality and morbidities,” Carlo says. “I am honored to have been selected among so many outstanding researchers and clinicians.”

“Wally Carlo is extremely deserving of this award,” says Sergio Stagno, M.D., chairman of the UAB Department of Pediatrics and physician-in-chief at Children’s of Alabama. “He is nationally and internationally known and is highly respected. Wally is a caring physician who is dedicated to the care of neonates, particularly the extremely premature infants, to training the next generation of physicians, and to expanding medical knowledge and designing health-care delivery systems that can be adapted to third-world countries. He is a true leader in every facet of neonatology.”

In the 20-plus years Carlo has been with UAB, he has helped make UAB a worldwide leader in neonatology education and leadership. UAB is the only academic medical center in the country that is involved in all three of the NIH research initiatives for maternal, child and family health: the Neonatal Research Network, Maternal-Fetal Medicine Units Network and the Global Network for Women and Children Research.

Carlo has published more than 250 manuscripts in peer-reviewed journals, including the New England Journal of Medicine, Journal of the American Medical Association, Pediatrics and Obstetrics and Gynecology. He has served on many university, hospital and national professional boards and committees and is a member of numerous professional organizations, including the Society for Pediatric Research and the American Pediatric Society.

Carlo earned his undergraduate degree from the University of Puerto Rico in Mayagüez and his medical degree at the University of Puerto Rico Medical Sciences Campus in San Juan. He completed his pediatric internship and residency at University Children’s Hospital in San Juan, where he was chief resident. He completed a neonatology fellowship at Rainbow Babies and Children’s Hospital in Cleveland and joined the faculty following his fellowship. Carlo is board certified in pediatrics and neonatal-perinatal medicine. He has been with UAB and Children’s of Alabama since 1991.