UAB teams up with Walmart Vision Centers and the CDC in an innovative telemedicine program for early detection and treatment of glaucoma.

The University of Alabama at Birmingham is launching an innovative telemedicine glaucoma detection program with independent optometrists located adjacent to two central Alabama Walmart Vision Centers. The program, funded by the Centers for Disease Control and Prevention, is primarily aimed at early detection of glaucoma in an at-risk population — African-Americans over age 40. 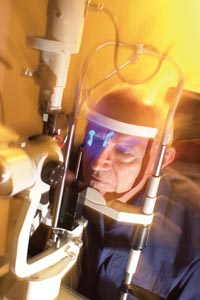 “Our current model of eye care is simply not reaching one of the most at-risk populations for glaucoma: older African-Americans,” says Christopher Girkin, M.D., chair of UAB’s Department of Ophthalmology and program director of the project. “Historically, this is an underserved population, who are less likely to seek professional eye-care services in a standard clinical setting. So we’re going to see if we can take appropriate vision care to them.”

The UAB program, funded by a two-year, $1.9-million grant from the CDC, will install sophisticated imaging machines in the optometrists offices located adjacent to the two Walmart Vision Centers, with a centralized image reading center housed at UAB.

The imaging devices, known as optical coherence tomography machines, provide high-resolution images of the back of the eye. A trained technician can detect the early stages of glaucoma in those images, even before symptoms appear. Images of a patient’s eyes will be electronically transmitted from the vision centers to the UAB center for analysis. If signs of glaucoma are detected, the UAB team will report those findings to the optometrist, who will be able to confirm a diagnosis of glaucoma and begin an appropriate treatment regimen.

“Early detection of glaucoma is the key to treating the disease and slowing its progression,”
says Girkin. “The vast majority of glaucoma cases can be treated with medicine, especially in the early stages. Patients will get their diagnosis, medicines and follow-up treatment by licensed optometrists located adjacent to the Walmart Vision Center.”

The program is not intended to replace a complete eye exam with a truncated screening method, notes Cynthia Owsley, Ph.D., professor of ophthalmology at UAB and co-program director. “Rather, it will bolster the eye exams already provided by optometrists with these automated detection methods,” she says. “It should allow these patients to continue to see their primary eye-care provider in their own community.”

Patients with significant eye disease, beyond the scope of care at the optometrist’s office, will be referred to the UAB Glaucoma Service, Callahan Eye Hospital Lions Eye Clinic or the Jefferson County Cooper Green Mercy Hospital Eye Clinic.

Frank LaRussa, O.D., and Daniel Box, O.D., the optometrists involved in the pilot program, are located adjacent to the Vision Centers in Walmart stores in Tuscaloosa and Birmingham, respectively.

Girkin, who is the director of the UAB Glaucoma Service and a recognized expert in the field, has been studying the use of ocular imaging techniques in the diagnosis of glaucoma for 13 years.

“This is an excellent example of the value of translating technology that has been evaluated and fine-tuned in the research setting and employing it in the field for the betterment of patients,” Girkin says.