The flu could be especially severe for the 39.6 million older adults in the United States.

We’ve all read about the severity of the current flu season. Boston declared an emergency, hospitals are seeing patients in tents outside their emergency departments and we all probably know someone who has been laid up for a week with fever and aches and generally feeling lousy. 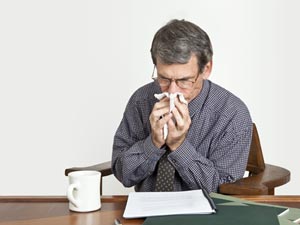 But the flu could be especially severe for the 39.6 million older adults in the United States. Defined as 65 years or older, the group makes up almost 13 percent of the total population. Add to that the number of people who care for an aging person – patient, parent or friend – and the impact on older people is even greater. What’s an older person or a caregiver to do?

The three biggest rules, according to Andrew Duxbury, M.D., associate professor in the Division of Gerontology, Geriatrics and Palliative Care at the University of Alabama at Birmingham (UAB) School of Medicine, are:

All human immune systems weaken with age, says Duxbury, also a member of the UAB Center for Aging. “So when older people get the flu and get knocked down further they are more likely to get other infections, such as pneumonia. Just being knocked into bed for as little as three or four days can, in a very frail older person, make it so they lose the ability to walk and do for themselves. It can cause a spiral in disabilities and increase chances of falls and injuries.”

If you or an older person you know has flu symptoms, Duxbury says, “Pay more attention to things like staying hydrated. Appetite and thirst mechanisms are different for older people; they can tip over to dehydration in less than a day if they don’t keep fluids up.”

Older people also need to get out of bed at least a minimal amount and sit up. “It’s better for lungs and helps avoid pneumonia," he says.

Call your doctor if you have a productive cough, fever higher than 101 or if you’re feeling short of breath.

Caregivers are an important link to the outside world for older people, which means they could also be vectors for the flu virus. “Caregivers need flu shots just like older people do,” Duxbury says.

Now is a good time for caregivers to create a Plan B,” Duxbury says. “One way to make yourself sicker and make an illness last longer is to try to push through it,” he says. “Caregivers may feel obligated, but it’s a good time to think about your plan B. If you can’t do it for a few days how’s it going to get done?”

This flu season is the worst in recent memory, Duxbury says, but it’s not bad enough to be called a pandemic. And while older people are more susceptible, they’ve already lived through worse flu seasons.

“The current elder population lived through 1957 and 1968 pandemics. They’ve seen a lot. Even the baby boomers lived through it,” he says.