by Jim Bakken
The UAB Courage Network provides an opportunity for employees who are newly diagnosed to lean on survivors for support.

Most anyone who has been diagnosed with cancer will likely think of it as one of the scariest moments of their life. But once a cancer diagnosis is made and the plans of attack are initiated, many seek normalcy – even returning to work while undergoing treatment. 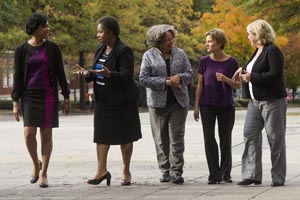 That does not mean that the fears and questions go away, however.

Breast cancer is one of the most common cancers among American women; about one in eight women in the United States will develop invasive breast cancer during her lifetime, according to the American Cancer Society. A new initiative at the University of Alabama at Birmingham (UAB) aims to support employees while they fight the disease.

UAB Wellness Director Lauren Whitt, Ph.D., said there are many passionate breast cancer survivors working at UAB, and they approached her with the idea to build a network where they can mentor their peers who are newly diagnosed.

“The Courage Network is a grassroots program where women have the opportunity to speak with a survivor who has already been through the treatment process mentally, physically and emotionally,” Whitt said. “These relationships are empowering women to face fears, ask questions, hope and believe that they too can thrive through this process.”

One of the survivors who developed the idea of this sisterhood was Deborah Grimes, J.D., an associate vice president and corporate compliance officer at UAB. Grimes said the idea spawned from a desire to do for others what several did for her when she was first diagnosed – be there by sharing their experiences and allowing her to learn from them.

“It helped me because I watched these women everyday working here, living a full life, despite the cancer, and I knew if they could do it, I could do it,” Grimes said. “As I went through it in 2010, it meant so much that I could reach out to the survivors at different stages to help prepare myself for chemotherapy, surgery and then radiation.”

Grimes added that having a group of survivors officially trained to help other employees as they embark on the journey toward beating breast cancer is an excellent resource for UAB.

“There are support groups out there, but when you work at an academic medical center and receive your care there, it’s different,” Grimes explained. “I hope this will decrease anxiety and increase collaboration and camaraderie to know there are so many survivors of breast cancer at UAB.”

Kristen Noles, a UAB advanced nursing coordinator over professional practice, and herself a breast cancer survivor, agreed that the new Courage Network will be an excellent asset to others.

“My role takes me all over campus, so many found out when I was diagnosed back in 2011,” Noles said. “It was informal, but I had many survivors reach out to me to help, and it made it easier for me.”

Noles said that because she went through breast cancer at a younger age than the average woman, it added another layer of challenges; fewer women her age had gone through it and won.

“I was juggling treatments, work, kids, family and friends, and trying to recover from weekly chemo on the weekends,” Noles said. “It was hard for some to understand that I still wanted to ‘live.’ Now I just had to do it with cancer. Just being able to talk about it with someone who understood, or even receive a smile or high five as I went through it, helped offer normalcy.”

In addition to meeting for lunch, coffee or just a phone chat, this network of women will also get together every quarter to celebrate survival anniversaries. Spring 2013 is the official kick-off for the Courage Network.