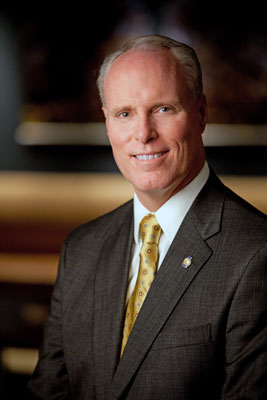 Chris Van Gorder, president and CEO of Scripps Health in San Diego, Calif., will be the keynote speaker at the ninth annual L. R. “Rush” Jordan Distinguished Lecture Series on Thursday, Feb. 28, at 6:30 p.m. at the Wynfrey Hotel, co-hosted by the University of Alabama at Birmingham (UAB) Health System, UAB’s Department of Health Services Administration and the Alabama Healthcare Executives Forum. Van Gorder will present “From Turnaround to Transformation: The Benefits of a Strong Corporate Culture.”

At the helm of Scripps Health since 2000, Van Gorder is leading the restructuring of the $2.5 billion integrated health system to best prepare for the changes of health-care reform. Scripps treats a half-million patients annually with 2,600 affiliated physicians and 13,500 employees among its five acute-care hospital campuses, home health-care services, an ambulatory care network of physician offices and 23 outpatient centers and clinics. In 2011, Modern Healthcare magazine named Van Gorder, for the fifth consecutive year, one of the nation’s “100 Most Influential in Health Care.”

Van Gorder’s rise in the health-care industry actually began when he was a patient. As a police officer, he was critically injured during a family dispute call. After a lengthy recovery, he continued his education in health-care management and earned his degree from California State University in Los Angeles. He went on to receive his master’s degree in public administration/health services administration at the University of Southern California and completed the Wharton System CEO Program at the University of Pennsylvania.

Van Gorder continues to serve the public as a reserve commander in the San Diego County Sheriff’s Department Search & Rescue Unit, as a licensed emergency medical technician and as an instructor for the American Red Cross. He is a past chairman of the American College of Healthcare Executives.

The L. R. “Rush” Jordan Distinguished Lecture Series was established to sustain L.R. Jordan’s legacy of integrating health-care practitioners into the classroom. Jordan was a long-time health-care executive and professor of health administration at UAB. His vision and leadership fundamentally changed the health-care delivery system. He led the transformation process for numerous health-care organizations, including Duke University Medical Center, Birmingham Baptist Hospitals, Ochsner Clinics and Foundation, Shands at the University of Florida and Miami Valley Hospital. For his tremendous contributions to the field of health administration, Jordan was inducted into Modern Healthcare’s Health Care Hall of Fame in 2000.

A cocktail reception begins at 5:30 p.m. Tickets for the dinner and lecture are $50. With limited seating, reservations are due by Feb. 21.