New marker predicts how resistant each patient’s brain cancer will be to chemotherapy.

Researchers may have discovered a more accurate way to predict how long patients with the deadliest form of brain cancer will live, according to an analysis by researchers from the University of Alabama at Birmingham (UAB) published today in the journal PLOS ONE. The authors say the finding could better inform physician recommendations on the most appropriate treatment strategy for patients with aggressive brain tumors. 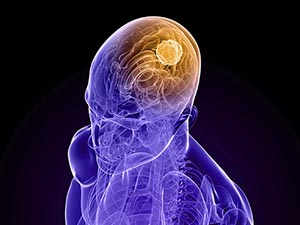 The new analysis examined tumors from patients with glioblastoma multiforme (GBM), who survive 12-15 months on average with the current combination of surgery, radiation and the chemotherapy temozolomide. GBM’s deadliness is due not only to its staggering growth rate and location in the brain, but also to how quickly GBM cells become impervious to treatment.

While radiation and temozolomide usually kill most GBM cells, those that survive can quickly multiply to fill the void. Tough, treatment-resistant tumor cells soon comprise most of the recurring tumor, and 90 percent of recurring tumors show no response to temozolomide. At this point, patients have few options, most of which merely bring comfort before death.

Into this grim picture comes the current study result, which found that the 25 to 30 percent of GBM patients whose tumor cells have an overactive version of the enzyme cytochrome c oxidase (CcO) live less than half as long as patients with a less active version.

“Our study reports for the first time the role of cytochrome c oxidase as a prognostic marker in GBM patients’ tumor tissues,” said Corinne Griguer, Ph.D., associate professor in the Division of Neurosurgery within the UAB School of Medicine and study leader. “High CcO activity comes with a 25-fold increase in risk of death.”

Presently, all patients with GBM tumors are lumped together in various prognostic models. The current study found, however, that patients with highly active CcO lived six months on average, whereas those whose tumors had lower CcO activity, closer to levels in normal tissues, lived 14 months.

The team investigated the relation between tumor CcO activity and survival times of 84 patients diagnosed with primary GBM and treated at UAB. They found that patient survival time tracked closely with CcO enzymatic activity, and without regard to subsequent therapies. Analysis of tumor tissue from a second group of European GBM patients yielded nearly identical results.

Most studies on CcO to date have focused on its role in a chain reaction in which the mitochondria, the powerhouses of human cells, produce energy. CcO, with the help of oxygen, turns sugar from food into energy needed for survival in a series of chemical reactions that use a process called oxidative phosphorylation (OxPhos). Energy mechanisms become relevant because of how cancer cells use energy as they seek to survive and resist therapy.

The current study is among the first to examine the role of CcO in mechanisms that determine how cancer cells use energy. The team found that cancer cells with higher CcO activity generate more energy and are better able to survive chemotherapy.

In addition, CcO plays a second role in cancer cell survival through its interaction with a protein called cytochrome c. If cytochrome c is not kept busy in the mitochondria by constant interaction with active CcO, it is available for release into the cytoplasm where it can trigger the cell to self-destruct.

Normal human cells are pre-programmed to self-destruct to protect the body when they become infected or are severely damaged by diseases, including cancer. In terms of evolution, it makes sense that a self-destruct mechanism would be “wired” through the energy producing machinery that keeps cells alive, and that cancer cells must disconnect this wiring to survive.

When temozolomide interferes with cancer cells’ ability to copy DNA, a vital step in cell growth, signals such as cytochrome c go out telling the cell to self-destruct. If highly active CcO is present, however, cytochrome c is less available for self-destruction signaling because it is already engaged in the mitochondria making energy for the threatened cancer cell, said Griguer.

A marker in current clinical use to predict each patient’s survival benefit from temozolomide is the activity of the enzyme O6-methylguanine-DNA methyltransferase (MGMT). When temozolomide damages a cancer cell, MGMT repairs the damage. If the gene for MGMT is shut down or silenced, however, by a process called methylation, the damage cannot be repaired and cancer cells die. MGMT methylation varies patient to patient.

Silenced MGMT should let chemotherapy-induced damage to cancer cells remain in place, but it does not perfectly predict outcomes, said Griguer. For instance, her new analysis found that in people with high CcO activity, there is no difference in the number of those with high or low MGMT methylation. The two markers did not agree, and further research is needed to understand why.

Previous cancer cell studies in Griguer’s lab had interfered with CcO activity by shutting off related genes or blocking its action with drugs. While they demonstrated in principle that CcO blockade counters chemoresistance, the drugs and methods used do not lend themselves to clinical use. Thus, an effort underway in her lab seeks to identify drug candidates for human testing.

“Giving some GBM patients bad news about their prognoses without also giving them better treatment options doesn’t seem right to me,” said Griguer. “That’s why our ultimate goal is to use the same mechanism that predicts shorter survival in some to design drugs that target cells not killed right away by chemotherapy.”

Along with Griguer, authors of the study within the UAB Division of Neurosurgery were G. Yancey Gillespie, Ph.D., Amber Gordon, Ph.D., James Markert, M.D., M.P.H., and Claudia Oliva, Ph.D. Important contributions were also made by Hassan Fathallah-Shaykh, M.D., Ph.D., within the UAB departments of Neurology and Mathematics and Alan Cantor, Ph.D., in the UAB  Department of Medicine and Division of Preventive Medicine, as well as by Ivan Radovanovic, M.D., Ph.D, and Virginie Clement-Schatlo, Ph.D., from the University of Geneva in Switzerland.

The research was funded in part by grants from the National Institute of General Medical Sciences (NIGMS), the National Center for Advancing Translational Sciences (NCATS and the National Cancer Institute (NCI) [R21 CA 139290 (Griguer), R01 CA 160821 (Griguer) and P20 CA151129 (Gillespie, Markert)]. Further funding was provided by a grant from the Alabama Drug Discovery Alliance, which was supported in part by the UAB Comprehensive Cancer Center (P30 CA13148), the UAB Center for Clinical and Translational Science (UL1 RR025777) and Southern Research Institute.

The content of this publication is solely the responsibility of the authors and does not necessarily represent the official views of the National Institute of Health and the views or policies of the Department of Health and Human Services, nor does mention of trade names, commercial products or organizations imply endorsement by the U.S. Government.