by Beena Thannickal
Partridge was honored for his exceptional talents and his commitment to make progress towards finishing the fight against cancer. 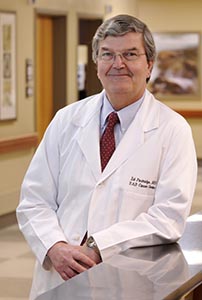 At a ceremony at its 100th Volunteer and Staff Birthday Summit today in Atlanta, Ga., Partridge was honored for his exceptional talents and his commitment to make progress towards finishing the fight against cancer. The annual Humanitarian Award, created in 1990, honors those who have made outstanding improvements in human welfare and social reform, particularly in improving care for medically underserved populations.

Partridge, a gynecological oncologist is highly recognized for his work to reduce racial and ethnic health disparities, as a leader in reaching underserved populations and for his research in cervical and ovarian cancer.

Partridge’s efforts helped gain Alabama participation in the Breast and Cervical Cancer Early Detection Program, which allows women diagnosed with an abnormal mammogram to receive treatment regardless of financial means. He has led the Alabama Black Belt Cancer Linkage Initiative, which assures that men and women diagnosed with cancer in Alabama’s Black Belt would get state-of-the-art care, and he is a co-founder of the Alabama Partnership for Cancer Control in the Underserved.

As a principal investigator for the Deep South Network for Cancer Control, a community-based participatory research network, Partridge has been instrumental in creating a community of cancer caregivers in Alabama to reduce racial and ethnic health disparities. He is also involved with a federally supported partnership among the UAB Comprehensive Cancer Center, Morehouse School of Medicine and Tuskegee University that pairs research at UAB with investigators at historically black colleges and universities to enhance cancer disparity research.  Partridge is also the co-director of the UAB Minority Health & Health Disparities Research Center.

His long-time volunteer work with ACS, since 1979, has led to many positions including a major role in the establishment of the Joe Lee Griffin Hope Lodge, which provides housing in Birmingham for out-of-town patients receiving cancer treatment. Most prominently, he was the president of the American Cancer Society’s national Board of Directors. He has also served as president of the Alabama Division, chair of the Mid-South Division and as a member of the Society’s Board of Directors.

He has served as chairman of the Cervical Cancer Screening Guidelines Committee of the National Comprehensive Cancer Network and is a past chairman of the Commission on Cancer for the American College of Surgeons.

Partridge, a native of Demopolis, Ala., has spent his entire career at UAB.  He rose from instructor to hold the endowed Margaret Cameron Spain Chair in Obstetrics and Gynecology and served for many years as director of the Division of Gynecologic Oncology.