by Jim Bakken
An abnormal heartbeat, known as atrial fibrillation, is associated with memory and thinking problems, according to new published research.

An abnormal heartbeat, known as atrial fibrillation, is associated with faster cognitive decline, according to new research from a University of Alabama at Birmingham (UAB) School of Public Health scientist. 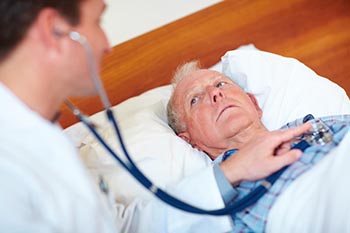 Atrial fibrillation is an irregular heartbeat that can lead to blood clots, stroke, heart failure and other heart-related complications, according to the American Heart Association; an estimated 2.7 million Americans are living with atrial fibrillation.

Study lead author Evan Thacker, Ph.D., statistician in the Department of Epidemiology, wanted to investigate whether people who had not experienced a stroke had cognitive decline, or memory and thinking problems, more quickly after being diagnosed with atrial fibrillation. Stroke has previously been found to increase cognitive decline.

“We found that age-related declines in average cognitive test scores did occur faster after diagnosis of atrial fibrillation, even after accounting for other factors that can hasten cognitive decline,” Thacker said of the findings, which are published in the June 5, 2013, online issue of Neurology®, the medical journal of the American Academy of Neurology.

Thacker and his team tracked participants in the Cardiovascular Health Study, about 5,000 people age 65 and older, with 100-point memory and thinking tests every year for an average of seven years. About 11 percent of the people developed atrial fibrillation during the study.

“We believe there are at least two possible explanations for our findings,” Thacker said. “The first is that small blood clots form in the heart and then lodge in the brain, not causing any immediate symptoms, but leading to damage over time. The other is that low output of blood to the brain from the irregular heartbeat may lead to small brain damage that builds up over time.”

“If we could discover the reason, then we might be able to conceive ways to prevent or reduce cognitive decline in people with atrial fibrillation,” Thacker said.