Exposure to nicotine during pregnancy leads to a decrease in adult stem cells and a change in synaptic plasticity in the hippocampus of the offspring, according to new research from UAB presented at Neuroscience 2010, the annual Society for Neuroscience meeting in San Diego in November. Researchers say this could be a possible cause for behavioral problems such as attention-deficit hyperactivity disorder (ADHD) seen in children whose mothers smoked. 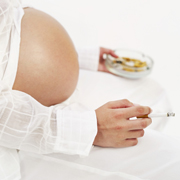 "Failure to correctly incorporate newborn cells into the circuitry of the hippocampus — and the resulting disruption of neural pathways essential to learning -— could account for some of the behavioral problems observed later in the lives of children of mothers who smoke during pregnancy," said Robin Lester, Ph.D., associate professor in the Department of Neurobiology and primary investigator. "These problems could include various cognitive deficits, learning difficulties, ADHD and an increased predisposition to drugs of abuse."

The World Health Organization reports that approximately 20 percent of women continue to smoke during pregnancy. Lester says the findings indicate that the insult resulting from gestational nicotine exposure may be one cause for learning disabilities in children and could provide a brain-circuitry mechanism accounting for these behavioral problems.

"Nicotine, along with other addictive drugs such as cocaine and morphine, have been shown to have similar effects on newborn cells when given to older animals, but our new results with nicotine suggest that these effects are more dramatic in newborns and may indicate increased risk and/or susceptibility for damage to the learning processes during pregnancy," said Shay Hyman, a doctoral student in Lester's laboratory. "These studies should provide further reasons and/or warnings to expectant mothers that they should seek help in refraining from smoking during pregnancy."

Lester says that that it will be essential to repeat these findings under conditions that more accurately resemble human smoking behavior. This can be done by allowing rats to press a lever in order to deliver nicotine when they want, thereby effectively giving them free will to "smoke" rather than continuously exposing them to the drug.

This research was supported by a United States Public Service Grant and the Evelyn F. McKnight Brain Institute.