Less-invasive robotic surgery for upper airway and digestive track malignant tumors is as effective as other minimally invasive surgical techniques based on patient function and survival, according to University of Alabama at Birmingham researchers. 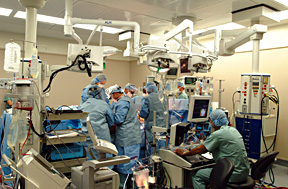 Head and neck squamous cell carcinomas account for about 4 percent of malignant tumors diagnosed in the United States each year. Currently the standard minimally invasive surgery for these tumors is transoral laser microsurgery.

Previous studies have shown that the robotic surgery was better for patients to regain the ability to swallow, a common and serious side effect, but never looked at cure rate. Manguson wanted to know if you could achieve function and get rid of the cancer at the same time. This study, published Dec. 20, 2010, in the Archives of Otolaryngology - Head & Neck Surgery, showed you could.

UAB otolaryngologist and the study’s senior author J. Scott Magnuson, M.D., and colleagues from UAB and the Mayo Clinic looked at 89 patients with various stages of head and neck squamous cell carcinomas whose primary tumor was resected using the da Vinci Robot. All of the patients were monitored during their hospital stay and up to 33 months after surgery.

“The overall two-year survival rate for these patients was 86.3 percent, which is comparable to the standard treatment,” Magnuson, also a scientist in the UAB Comprehensive Cancer Center, said. “Those with earlier-stage tumors appeared to have slightly better recurrence-free survival than those with later stages, but it was not statistically significant.”

Magnuson said patient swallowing varied depending on the location of the tumor, preoperative swallowing ability, cancer stage and patient age, and their findings on function were consistent with previous research. Some patients, he said, tolerated an oral diet one to two days after surgery while some were discharged with a short-term nasal feeding tube or long-term gastric feeding tube, including some who were feeding tube-dependent prior to surgery.

“Of note,” he added, “all of the patients in the study had regained full swallowing ability at the time of the last follow up visit and none remained feeding-tube dependent.”

Magnuson said the study’s results are encouraging and show robotic surgery offers a technically feasible and oncologically sound alternative treatment for some patients with head and neck squamous cell carcinomas, but he cautions more work needs to be done.

“This is a relatively new technique, and long-term oncologic outcomes are not available,” he said. “However, the early functional and oncologic results justify the continued treatment of select patients with head and neck squamous cell carcinomas with robotic-assisted surgeries.”