by Tyler Greer
UAB is the only hospital in the state to offer the minimally invasive MitraClip procedure to aid patients suffering from mitral regurgitation.

Mary York knew the walk from the living room to the bedroom should not have been difficult for her husband, Bill, despite his age, but the 83-year-old could not walk anywhere in his house without stopping to rest for minutes at a time. 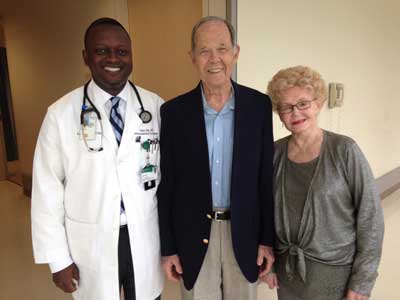 “He just couldn’t breathe, couldn’t catch his breath, and that was with him just barely moving,” Mary York said. “When Bill finally told me one night that he didn’t want to live anymore, it just broke my heart.”

The Yorks had driven from their home in Cullman to Birmingham and visited several cardiologists, trying to find a solution to Bill York’s condition, mitral regurgitation. They tried different medications, and even open-heart surgery was recommended for him — a prospect Mary York didn’t think her husband could survive.

A family friend encouraged them to visit cardiologists at the University of Alabama at Birmingham to get another opinion, and it was one she believes saved his life.

“MitraClip therapy is a groundbreaking treatment for mitral regurgitation, which is the most common type of heart valve insufficiency,” Alli said. “This device is currently the only minimally invasive treatment we have for these high-risk patients, and it is the only device that has been effective in treating severe mitral regurgitation apart from open surgical repair or replacement. Open surgical repair or replacement is still the standard of care for patients who can undergo open-heart surgery, and the MitraClip is approved for use in high-risk surgical patients, like Mr. York.”

Mitral regurgitation, which is progressive and life-threatening, occurs when the leaflets of the mitral valve do not close completely, causing blood to flow backward and leak into the left atrium of the heart during the cardiac cycle. The heart then has to compensate to provide adequate blood flow, which causes the left ventricle to increase in size. That causes the heart to work harder, and can raise the risk of irregular heartbeat, stroke and heart failure, which can be deadly. 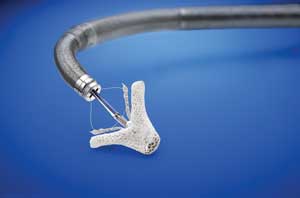 Illustration via Abbott VascularThe MitraClip enables interventional cardiologists like Alli to deliver the clip through the femoral vein in the groin to the affected area along the mitral valve within the heart. Once there, the cardiologist delivers the clip, which attaches the mitral valve together to create a double-barreled orifice.

“We pull the edges of the two leaflets of the valve together using the MitraClip,” Alli said. “The valve leaflets become fused together, with creation of a double-barreled valve orifice with two holes side by side that allows the blood to go forward but prevents it from coming backward.”

MitraClip, produced by manufacturer Abbott, is a nonsurgical treatment and necessary for patients like Bill York. The medications he was prescribed were designed to control and relieve the symptoms of mitral regurgitation, but there are no medications available to correct it. The medications, however, did not relieve his symptoms, and Bill York had fluid buildup in his legs and lungs, making his condition dire.

Open-heart surgery can be performed to replace the damaged mitral valve with a mechanical or bioprosthetic valve; but Louis Brunsting, M.D., associate professor of surgery and chief of the Section of Minimally Invasive Cardiac Surgery, did not believe that was a feasible option for Bill York, whose condition left him extremely frail.

“Because we have a comprehensive valve program, where every patient is seen by a surgeon and interventional cardiologist, we were able to find the best course of treatment for Mr. York,” Alli said. “There are a lot of Mr. Yorks out there who need help, who suffer from severe mitral regurgitation and can’t find relief from medication and are not good candidates for surgery. We’re excited to be the only center in Alabama and one of only a handful of centers in the United States to offer this device.”

Mitral regurgitation affects nearly one in 10 people ages 75 and older and approximately 4 million people in the United States alone.

Via Abbott The Food and Drug Administration approved the MitraClip for the treatment of mitral regurgitation for commercial use in the United States in October 2013. Patients undergoing the procedure typically experience short recovery times and an average hospital stay of only three days. Bill York went back home to Cullman a few days after his procedure.

“I feel great for an old man,” Bill York said. “My breathing is so much better now. It’s exciting to feel good again.”

It is a good feeling for his wife, too.

“We’ve been married for 65 years; he’s my first love, and he’s my last love,” Mary York said. “He’s not only my husband, he’s my best friend. I’m so thankful and appreciative for Dr. Alli and everyone at UAB who helped us find the answers to our problem. It means more than I can explain.”

For more information about the structural heart disease program or for patient referrals, call 205-934-7898.