Though the cause of Alzheimer's disease still is unknown, recent studies have implicated three proteins strongly in its onset. New research from the University of Alabama at Birmingham, the Gladstone Institutes and the Baylor College of Medicine indicates that interactions between those three proteins might lead to brain dysfunction and AD in a mouse model of the disease. 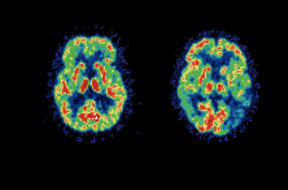 "There has been growing interest in 'network dysfunction' as a cause of AD," said Erik Roberson, M.D., Ph.D., assistant professor in the Departments of Neurology and Neurobiology at UAB and lead author of the study. "Rather than thinking about individual cells dying, we are thinking about abnormalities in the way groups of neurons fire together as a cause of cognitive impairment in AD.

"Currently, we only have a few drugs to treat Alzheimer's disease, and those do not have dramatic effects in most patients," said Roberson. "It is exciting to me that our results might point to a new direction for developing drugs to treat this dreaded disease."

The three proteins are amyloid beta (A?), tau, and Fyn. A? collects into aggregates in the brains of AD patients. These A? plaques are a pathologic hallmark of AD and smaller complexes of A? are considered a primary cause of memory dysfunction in the disease. Fyn is an enzyme that regulates other proteins by adding small phosphate chemical groups to them. Fyn cooperates with A? to increase cognitive deficits in mice. The protein tau makes up part of the "skeleton" of the cell and aggregates into tangles in the brains of AD patients.

The research team used mice that were engineered genetically to produce large amounts of A? or A? plus Fyn in the brain. These mouse models replicate many symptoms of AD. They then used genetics to determine whether or not reducing tau levels might have beneficial effects in the mice. The results of the study were published in the Jan. 12, 2011, issue of the Journal of Neuroscience.

Previous studies have shown that AD mice have abnormal, seizure-like discharges during which many neurons fire at the same time. The findings indicate that tau reduction blocks this network dysfunction.

"We show, by putting an electrode into individual cells in the network, that neurons affected by A? have an imbalance between the excitatory and inhibitory input onto the cells—they are still getting excitatory input, but the inhibitory input is greatly reduced," said Roberson. "This may be why the neurons are all firing together abnormally. Tau reduction blocked this excitation/inhibition imbalance, which probably is how it corrects the network dysfunction."

"These results show how three proteins work together to disrupt signaling that occurs between brain cells to form our memories," said Lennart Mucke M.D., director of the Gladstone Institute of Neurological Disease and senior author on the study. "We might be able to develop therapies to disrupt this problematic relationship and benefit patients."

Previous studies by the authors showed that reducing levels of tau prevents the cognitive deficits in AD mice. In the present study, the scientists showed that reducing tau levels also prevented cognitive deficits due to the combined effects of A? and Fyn. They also found that reducing tau prevented the disruption of connections between neurons in the brain that allow us to store memories and normalized the firing patterns of neurons, and that the frequent epileptic-like events in AD mice did not occur when tau levels were reduced.

The study was supported by the Stephen Bechtel Fund and the National Institutes of Health.