by Jeff Hansen
Increased risk of major adverse cardiac events after the later surgery persists for one year. 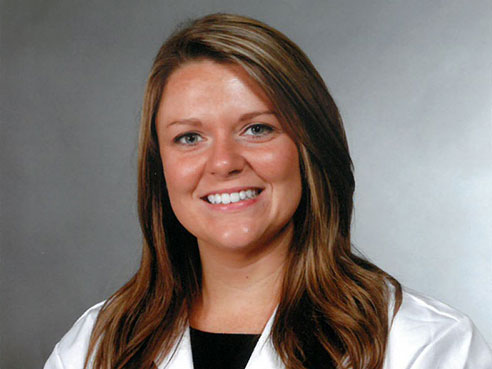 Carla HolcombA patient who has noncardiac surgery sometime after a stent is put into a coronary artery to open up a blockage has a greater risk for major adverse cardiac events (MACE) following the operation, but the optimal time to delay such elective surgery after stenting was not known.

In a study of more than 28,000 patient records, first author Carla Holcomb, M.D., MSPH, a University of Alabama at Birmingham Gastrointestinal Surgery postdoctoral fellow, and colleagues have found that during the 12 months following a coronary stent placement, patients have a 2 percent increased risk for heart attack or the need to unblock a coronary artery within 30 days after a noncardiac surgery, but have no greater risk of death. The study is published online ahead of print in Annals of Surgery.

“This study changes the way we think about coronary revascularization,” said Holcomb, who is also a member of the Center for Surgical, Medical Acute Care Research and Transitions (C-SMART), in the Birmingham (Alabama) Veterans Administration Hospital. “Many surgeons assume that a patient with a coronary stent has a protective benefit over those who have similar cardiac risk factors but have not been revascularized prior to surgery. They think that, because a closed vessel is now open, there will be a decreased risk for a myocardial infarction after surgery. However, what we saw in our study is that a stent seems to be a marker of advanced coronary artery disease, which is why we saw the increased risk of postoperative adverse cardiac events in this population.”

The study was a matched retrospective cohort study of patients having noncardiac surgery between October 1999 and September 2011 in Veterans Administration hospitals. Each stented patient (9,391 in all) was matched with two nonstented patients (18,782 in all) by age, year of surgery, surgical complexity, surgical specialty, kidney disease, history of coronary artery disease, congestive heart failure, stroke, insulin-dependent diabetes and high-risk surgery.

Adverse cardiac events in the 30 days after surgery occurred in 531 of the stent patients (5.7 percent) and 680 of the nonstent patients (3.6 percent). Statistical analysis showed that there was a 5 percent increased risk of heart attack for the stented patients immediately after getting the stent and having a noncardiac operation. At one year the increased risk was 2 percent, and after that it was no longer significantly elevated.

“The findings from this study suggest that patients with a history of coronary stenting before an elective surgery are at higher risk for postoperative MACE than would be suggested by the revised cardiac risk index, which incorporates underlying cardiac and surgical factors into its calculation,” the study authors wrote. “Furthermore, this higher risk persists for a full year after stent placement.”

The mechanism of this higher risk is not known: The stent may be a direct cause, or stenting may be a marker of more severe coronary artery disease in the stent patients as compared to the nonstent patients, a severity that is not accounted for in the revised cardiac risk index, the authors say.

Limitations of the study — which was a yearlong, multi-institution collaboration that involved a partnership with surgeons, cardiologists and health services researchers’ agreeing on the important findings — include a lack of details in patient records on the extent of underlying coronary disease in the patients and the use of a cohort that is entirely VA patients who were mainly white, older males.

“Regardless, it does not seem that coronary stenting conveys a protective effect,” the authors said.

Laura Graham, MPH, UAB Department of Surgery research associate and member of C-SMART Birmingham, was the lead analyst instrumental in creating the matched cohort and merging data sources that included administrative codes and the VA Surgical Quality Improvement Project to capture the variables of interest for the study. The funding and design of the study were provided by Mary T. Hawn, M.D., MPH, of UAB Section of Gastrointestinal Surgery and C-SMART Birmingham, who served as both the senior author on the paper and Holcomb’s research mentor.