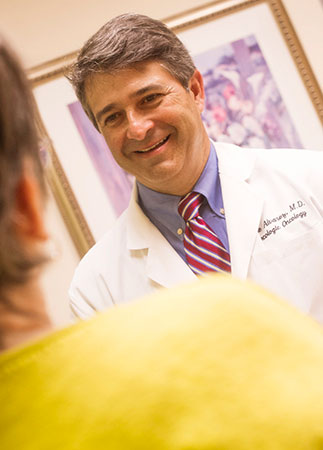 Ronald AlvarezThe University of Alabama at Birmingham Comprehensive Cancer Center is enrolling lung cancer patients into two leading national clinical trials, the LUNG-MAP and The Adjuvant Lung Cancer Enrichment Marker Identification and Sequencing Trials, better known as the ALCHEMIST, in which genetic screening is conducted on the tumors of all participants to determine the genetic alterations that drive their specific lung cancer and potentially could be inhibited by a molecularly targeted therapeutic.

In 2014, the National Cancer Institute launched the National Clinical Trials Network, intended to improve treatment for the more than 1.6 million Americans diagnosed with cancer each year. In the same year, after a competitive peer-review application process, UAB was awarded an NCI grant and was chosen as an NCTN Lead Academic Participating Site, one of 30 cancer centers in the nation chosen and one of only five in the Southeast.

Ronald Alvarez, M.D., professor in the UAB Division of Gynecologic Oncology, who applied for the NCI grant, also heads up the NCTN group at UAB.

“It is because of this grant that UAB could offer significant precision-based clinical trials like this to patients in our community who are affected by lung cancer,” said Alvarez, principal investigator on the NCTN grant. “This clinical trial opportunity is an example of what personalized medicine is all about.”

“With these trials, all our patients are able to receive the best possible treatment, which might include various chemotherapy options or new drugs designed to attack their particular cancer based upon their tumor’s specific characteristics,” Alvarez said.

LUNG-MAP is a first-of-its-kind clinical trial that uses a multidrug, targeted screening approach to match patients with sub-studies testing investigational new treatments based on the unique tumor profile. For squamous cell lung cancer patients, the clinical trial uses state-of-the-art genomic profiling to match patients to sub-studies of investigational treatments that may target the genomic alterations, or mutations, found to be driving the growth of their cancer. Instead of having to undergo multiple diagnostic tests to determine eligibility for many different studies, enrollees are tested just once according to a master protocol and assigned to one of five different trial sub-studies, each testing a different drug from a different developer.

“Involvement in these types of clinical trials provides better access for patients to promising drugs and the infrastructure needed to test these investigational drugs here at UAB,” Alvarez said.

The ALCHEMIST are a group of clinical trials for patients with certain types of early-stage non-small-cell lung cancer that has been treated surgically. The ALCHEMIST also involves genetic profiling of tumor specimens removed during surgery and matching patients with specific gene mutations to trials evaluating drugs that target those specific mutations. Patients will already have had surgery and adjuvant therapy proceedings with the ALCHEMIST treatments.

“We want to encourage patients with early-stage lung cancer to enroll in these trials so that we can treat them early with drugs that target their specific genetic mutations, with the hope that we will help increase the number of lung cancer patients who can be cured,” said Francisco Robert, M.D., professor in the UAB Division of Hematology and Oncology and a lung cancer specialist. “In the age of precision medicine and targeted therapy, the primary objective of both these trials is to learn whether a targeted cancer therapy that is matched to the genomic makeup of a patient’s lung cancer tumor is more effective than the current standard therapy in halting or reversing the progress of the disease and extending the patient’s life.”

Patients with lung cancer are encouraged to talk to their doctors about which trial might be appropriate for them.

For detailed information and eligibility requirements for the LUNG-MAP and ALCHEMIST contact Liz Busby, director of Oncology Clinical Trials at the UAB Comprehensive Cancer Center at 205-934-0337 or lizbusby@uab.edu.